Yosemite: A Park of Extremes

Update Required To play the media you will need to either update your browser to a recent version or update your Flash plugin.
By VOA
10 June, 2016


Today, we visit one of the most famous national parks in America. You can find it high in the Sierra Nevada Mountains of the western state of California. It is one of the most stunning places in the country. Its name is Yosemite.

Yosemite National Park is a place of extremes. It has high mountains. It has valleys formed by ancient ice that cut deep into the Earth millions of years ago. Water from high in the mountains falls in many places to the green valley far below. There are thirteen waterfalls in Yosemite Valley. One of these waterfalls, Yosemite Falls, is the fifth highest on Earth. Up in the mountains are clear lakes, fast-moving rivers, and huge rock formations . One rock is called Half Dome. It rises more than 2,700 meters into the air.

More than 60 kinds of animals live in the park. Deer are very common. You might even see a large black bear. More than 200 kinds of birds live in Yosemite.

In a place called the Mariposa Grove, visitors can see some of the largest, tallest and oldest living things on Earth.

These are the giant Sequoia Trees. One of these trees is called Grizzly Giant. It is more than 1,800 years old. It is almost 63 meters tall. At its base, it is 28 meters around. The old trees can make visitors feel quite small. Half Dome and Yosemite Valley in a view from Glacier Point at Yosemite National Park, California

The Creation of Yosemite

The story of the Sierra Nevada Mountains and the area that is Yosemite National Park begins about 500 million years ago, when the area was at the bottom of an ancient sea.

Scientists believe strong earthquakes forced the bottom of the sea to rise above the water. After millions of years, it was pushed up into the air to form land and mountains. At the same time, hot liquid rock from deep in the Earth pushed to the surface. This liquid rock slowly cooled. This cooling liquid formed a very hard rock known as granite.

Years and years of rain caused huge rivers to move violently through this area. Over time, these rivers cut deep into the new mountains. During the great Ice Age, millions of tons of ice cut and shaped the cooled granite to form giant rocks.

Millions of years later these would become the giant rocks like Half Dome and El Capitan in Yosemite National Park.

Humans have lived in the area of Yosemite for more than 4,000 years. The first people who lived there were hunters. Most were members of a tribe of Native Americans called the Miwok.

A famous hunter and explorer named Joseph Walker passed through the area in the 1830s. He reported about the massive rock formations.

In 1864, a United States senator called for legislation to give the Yosemite Valley to the state of California as a public park. The legislation said the valley should be preserved and protected. President Abraham Lincoln signed the bill.

This event marked the first time that a government had approved a law to preserve and protect land because of its great beauty. The land was to be kept for the public to enjoy. Yosemite became the first state park. It was the first real park in the world. Then, in 1890, it became a national park.

The National Park Service is responsible for the park today.

Yosemite is about 320 kilometers east of San Francisco. The roads leading to the park pass over lower parts of the huge mountains. Then the road goes lower and lower into the Yosemite Valley.

Visitors to Yosemite Park can say in several kinds of places in Yosemite Park. Beautiful old hotels are near the park. Some are very costly. Many people bring tents and camp in the park. It costs only a few dollars a day to place a tent in the approved areas. 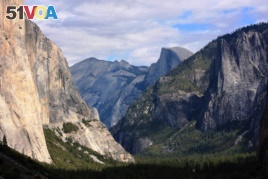 A view seen on the way to Glacier Point trail in the Yosemite National Park, California.

Visitors can walk through the beautiful valley and the mountains. There are more than 1,100 kilometers of walking paths. Some short trails take only a few minutes to walk. Others can take days to complete.

People come from all over the world to climb the rock formations at Yosemite. The most famous of these is called El Capitan. Climbers call it "El Cap" for short. Climbing El Cap is only for rock climbing experts. It is difficult and dangerous.

The climb is straight up the face of a rock wall. People say it can take about three days to climb to the top of El Cap. Climbers must look for cracks in the rock. They place their hands and feet in the cracks and then work their way up. They also use ropes and special equipment.

From the bottom of the valley to the top of El Cap is about 1,100 meters. The climbers on El Cap must rest and sleep during the climb. They hang cloth beds, or hammocks, on the rocks. 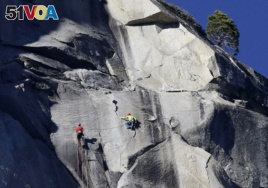 In 2015, two American rock climbers made history by becoming the first people to "free climb" El Cap's Dawn Wall. It is considered one of the hardest climbs in the world. Free climbing means climbing with little special equipment and ropes. It took them 19 days to climb all the way to the top.

One of America's most popular parks

In summer, Yosemite Park is filled with visitors. Large buses bring people from San Francisco to spend the day. Other visitors come by car. Some even come by bicycle. This April 2013 photo shows the bus at Yosemite National Park picking up passengers at Sentinel Bridge, with Yosemite Falls in the background.

About 4 million people visit the park every year.

In the winter, heavy snow falls in the Sierra Nevada Mountains and Yosemite. The snow usually begins in November. Heavy snow forces some of the roads into Yosemite to close during the winter months. The National Park Service works hard to keep most of the roads open.

Winter visitors enjoy a special beauty at Yosemite. Many come to spend their time skiing at Badger Pass. It has a ski school for those who want to learn the sport.

Some of the highest mountain peaks keep their snow until the last hot days of summer.

But, whenever visitors come to Yosemite, they experience great natural beauty in one of America's first parks.

trail - n. a path through a forest or up a mountain