Update Required To play the media you will need to either update your browser to a recent version or update your Flash plugin.
By Ashley Thompson
05 August, 2016


Our national parks journey this week takes us to an extreme landscape in Colorado. Around us are clear lakes, aspen and fir trees, and mountain peaks that rise over 4,400 meters.

The vast Rocky Mountains range extends from the western United States up to Canada. National parks in both countries protect many of the huge peaks. 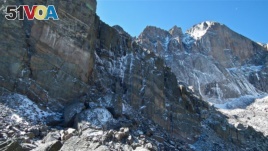 Here in Colorado, Rocky Mountain National Park covers about 1,100 square kilometers. Although it is much smaller than other western parks, like Yellowstone, it welcomes almost as many visitors each year.

People from around the world come to experience its alpine, or high-mountain, environment. In the spring and summer, wildflowers burst to life and many kinds of butterflies arrive. In the fall, the aspen trees turn bright yellow and orange. In the winter, deep snow blankets the park. Its peaceful alpine lakes freeze over.

The Rockies' huge glaciers form the rivers. Glaciers help tell the natural history of the land. Over millions of years, glaciers carved deep canyons out of rock. Erosion from wind and water formed the mountains' sharp summits that we see today. Rock at the top of these summits is some of the oldest found on Earth.

It was not until 11,000 years ago that humans began living in the area. The Utes tribe settled here - for part of the year - thousands of years ago. Winter was too severe to survive. When the weather warmed, they lived in the green valleys and meadows and near the lakes.

In 1803, the U.S. government gained control of the land we now call Rocky Mountain National Park. It came as part of the Louisiana Purchase, which nearly doubled the size of the United States.

In the 1840s, American writer Rufus Sage came to the Rockies. He wandered the area from 1841 until 1843, spending time with fur trappers, Native Americans, soldiers and hunters.

His long and detailed account of mountain life was published in 1846. He called it "Scenes in the Rocky Mountains."

Rufus Sage wrote, "Further on were yet higher summits, surmounted by pines and cedars, raising their heads in stately grandeur far above the sweet valleys at their feet. Taken together, the scenery was not only romantic and picturesque, but bewitching in its beauty and repulsive in its deformity."

Beginning in the late 1850s, gold and silver rushes brought huge crowds to the Colorado Rockies. Miners arrived in search of the precious metals. They settled temporary cities. One of the best-known is called Lulu City. It was settled in the late 1870s after miners discovered silver nearby. By 1880, more than 500 miners lived in Lulu City. It had a meat shop, a post office, and many houses and mining companies. Lulu City was short-lived. In just five years, miners left town, seeking other opportunities.

Today, some visitors choose to hike to this "ghost town," where they will find old cabins and remains of buildings.

As more and more people came the area, concern for protecting the natural environment grew. In 1909, the nature guide and naturalist Enos Mills began pushing for the creation of a national park here.

He first climbed the towering Longs Peak when he was just 15 years old. Longs Peak is the area's tallest mountain, at 4,346 meters. Mills made the hike 40 more times by himself during his lifetime, and almost 300 times as a mountain guide.

Mills gave wrote and gave talks about the Longs Peak area to urge Congress to make it a national park.

Today, more than 3 million people visit Rocky Mountain National Park each year. In 2015, it was the third-most visited national park in the country.

Many visitors arrive by car. They drive the Trail Ridge Road, which winds through meadows and forests and up the mountains. The road was built during the 1930s, during the Great Depression.

At the time, many of the western national parks were served by the railway. Travelers arrived on trains. But, a railroad never served Rocky Mountain National Park. The National Park Service described it as "always an auto park."

The high number of visitors and vehicles caused concern. In the 1970s, park officials began managing crowds. They started using buses in the park, and created a campsite system in the wild backcountry.

Rocky Mountain National Park's scenery, hiking trails, and wildlife attracts huge numbers of visitors. It has over 480 kilometers of hiking trails. They include challenging climbs up some of the tallest mountains and forest hikes that lead to one of the park's many waterfalls.

They also include trails to crystal blue alpine lakes. One leads to Mills Lake, in honor of Enos Mills. The view of Longs Peak from the lakeside is one of the finest views in the whole park.

One of the most extreme hikes in the park is the Continental Divide Loop. The 86-kilometer path cuts through glacial valleys and past lakes and waterfalls. It takes most hikers at least six days to complete.

Long hikes give visitors a chance to experience Rocky Mountain wildlife. Within the park are hundreds of elk and bighorn sheep, as well as a small moose population. The park's huge number of large animals makes it one of the best places in America for wildlife watching.

Butterflies fill the park's meadows. Some of the most common kinds are the Painted Lady, the Arctic Blue, and the Western Pine Elfin.

Butterflies help researchers in the park study the effects of climate change. Scientists and volunteers collected information on butterfly populations from 1995 until 2011. They identified more than 140 butterfly species.

Park visitors also come to fish, bike, and go horseback riding.The animals are permitted on most of the park's hiking trails.

You can ride in the park on horseback. You can explore on foot. You can sleep under the stars. You can sit be a clear quiet lake. However you visit Rocky Mountains National Park, you will likely find, in the words of Enos Mills "the paths of peace and a repose that is sweeter than sleep."

Ashley Thompson wrote this report with materials from the National Park Service. Caty Weaver was the editor.

alpine - adj. of or existing in high mountains

blanket - v. to cover (something)

summit - n. the highest point of a mountain

dominate - v. to have control of or power over (someone or something)

wander - v. to move around or go to different places usually without having a particular purpose or direction

scene - n. a view or sight that looks like a picture

surmounted - v. to be placed at the top of (something)

bewitching - adj. attractive or delightful in a way that seems magical

ghost town - n. a town that no longer has any people living in it

repose - n. a state of resting or not being active