Update Required To play the media you will need to either update your browser to a recent version or update your Flash plugin.
By Ashley Thompson
17 June, 2016


Today we are visiting a vast and remote park in the state of Alaska. The park is bigger than the country of Switzerland. It is six times the size of Yellowstone. In fact, it is the largest national park in America.

Its name is Wrangell-St. Elias.

Do not worry if you have not heard of America's biggest national park. Most Americans do not know its name.

But Wrangell-St. Elias contains some of North America's largest glaciers and volcanoes. It also is home to nine of the highest mountains in America. 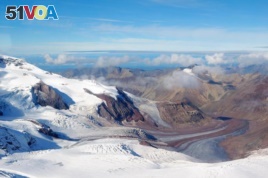 The Chugach Mountains cover the southern part of the park. The Alaskan Mountain Range forms some of the huge park's northern boundary.

The mountain landscape is wild. Much of it is also difficult to reach. Private companies offer "flightseeing" tours on planes and helicopters. From high above, visitors witness Wrangell-St. Elias's beauty.

A world of water

Rivers and glaciers help tell the story of Wrangell-St. Elias National Park. These rivers, with names like Copper, Chitina, Chisana, and Chitistone, come from the park's many glaciers. They wind through land carved out by other huge glaciers long ago. The Copper, the largest river of them all, flows into the Gulf of Alaska. Other rivers take a more dramatic path. The Chitistone River becomes Chitistone Falls, a 91-meter-tall waterfall that drops over a steep wall.

Glaciers cover almost 13,000 square kilometers of the park. In summer months the park's rivers carry their meltwater. It is filled with tiny pieces of sand, stone and other materials. A buildup of this sediment forces the rivers to flow through new channels. This causes the riverbeds to twist and turn. From up above, these rivers can look like braided hair.

One of the park's most striking places is the Hubbard Glacier. It is the longest tidewater glacier in North America. A tidewater glacier is one that begins in a mountain valley and flows all the way to a body of water. The Hubbard Glacier is 120 kilometers long and nearly 10 kilometers wide. It begins on the 6,000-meter-tall Mount Logan in Canada's Yukon Territory. It ends in the waters of a place called Disenchantment Bay.

Hubbard was named in 1890 after Gardiner Hubbard, the first president of the National Geographic Society.

The massive glacier is only getting bigger. Unlike most glaciers, Hubbard is thickening and extending. Other glaciers face melting caused by increasing temperatures. But experts say Hubbard reacts in an opposite way to climate change.

As the Earth's temperature rises, the area around Wrangell-St. Elias gets more snow and rain. Scientists say this snow and rain is what permits the glacier to grow.

Sometimes, very fast growth causes huge pieces of ice to break apart from the glacier. Scientists call this "calving." The ice creates a thunderous sound as it breaks and falls into the water.

Hubbard Glacier's size, beauty, and "calving" activity have made it popular with park visitors. Large boats travel through Disenchantment Bay, taking passengers close to the glacier.

Wrangell-St. Elias' system of glaciers and rivers help support animal life in the park. The park's Dall sheep may be the most famous animal residents. Alaska's Dall sheep are the world's northernmost wild sheep population.

About 13,000 Dall sheep live within the park's borders. Visitors can look for their white bodies and huge brown horns near rocky mountainsides.

Visitors might also see black bears, brown bears, moose and caribou. Caribou are large North American reindeer with huge, wide antlers. Along the coast seals and sea lions lie in the ice and splash in the water.

Wrangell-St. Elias became a national park in 1980. The park's main visitor's center is about 300 kilometers east of Anchorage. The long drive to get to the park is an adventure itself. The trip includes roadside views of mountains, glaciers, waterfalls, and lakes.

Its distant location makes it one of America's least-visited national parks. About 75,000 people visit Wrangell-St. Elias each year. By comparison, parks like Yosemite and Yellowstone get about 3 million visitors each year.

Visitors can experience the park's pristine nature as well as its historical areas. The Athabascan people lived in the area thousands of years ago. The park includes sites of their villages and hunting areas.

The park also has many historical structures and buildings. The National Park Service says the structures represent periods of exploration, mining and transportation.

One historical place is called Kennecott Mill Town. The picturesque town tells a story of westward expansion and discovery.

Miners processed nearly $200 million worth of copper at Kennecott Mines between 1911 and 1938.

Many of the buildings that remain in the town have been empty for 60 years. Some are in disrepair. The National Park Service works with the local community to restore and preserve them.

Some visitors stay at Kennecott during their trip to Wrangell-St. Elias. The family-owned Kennecott Glacier Lodge provides beautiful views of the surrounding glacial mountains. It also gives visitors a chance to try exciting outdoor activities like glacier hiking or ice climbing.

Some visitors choose to sleep in the wild outdoors. Private campsites are located in many areas of the park. Some visitors set out on long hikes in the park's backcountry area.

Whatever way you visit, the immense and untouched beauty of Wrangell St. Elias National Park is guaranteed to awe.

Ashley Thompson wrote this report, with materials from the National Park Service. Caty Weaver was the editor.

remote - adj. far away from other people, houses, cities, etc.

range - n. a series of mountains or hills in a line

boundary - n. something (such as a river or fence) that shows where an area ends and another area begins

landscape -n. an area of land that has a certain quality or appearance

twist - v. to bend or turn (something) in order to change its shape

braided - adj. formed with three or more parts woven together

thunderous -adj. making a loud noise like the sound of thun

antlers -n. the horn of a deer or similar animal

pristine -adj. not changed by people : left in its natural state

preserve -v. to keep (something) in its original state or in good condition

awe -v. to fill someone with a strong feeling of wonder or respect