Update Required To play the media you will need to either update your browser to a recent version or update your Flash plugin.
By Susan Shand
25 November 2020


In a small house in Belgrade, a teenage girl is drying her hair, while two others eat nearby. Several boys are having their temperature measurements taken at the door to the house to protect against coronavirus.

It is another busy day for Svratiste, or Roadhouse. It is Belgrade's first drop-in center for children who live on the streets. They can come inside at any time of day. For years, the building has provided warmth and shelter for the Serbian capital's most neglected occupants.

Since opening in 2007, Svratiste has welcomed hundreds of children, some as young as five-years old. They come here to warm up, wash or eat. Now, with social restrictions and economic conditions worsening in the COVID-19 pandemic, the work of the center has become even more important. 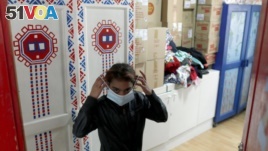 In this photo taken Wednesday, Oct. 28, 2020, a girl puts on her mask in Svratiste, or Roadhouse, Belgrade's first daily drop-in center for street children, in Serbia. (AP Photo/Darko Vojinovic)

Coordinator Mina Lukic said the health crisis has made Belgrade's poor even poorer as it hurts the Serbian economy.

Usually, poor children and their families get money for pieces of plastic or other scrap material that they collect to sell. But prices have dropped sharply in recent months, and they cannot earn enough money.

"We believe this is why we have more children visiting us in the past weeks than they used to," Lukic said.

"The kids that come to us are all aged 5 to 15," she added. "What's common for all of them is that they work in the street and live in extreme poverty."

Hundreds, if not thousands of children in Belgrade are poor. Their families often live in neglected areas. They mostly do not use the state's social, health care and education systems.

From an early age, the children are sent out in the streets to ask for help, collect scrap materials or look for other ways to find food or money. They often are abused. Very few ever go to school.

While Serbia has a nationwide system of social care centers and groups for the poor, Lukic said, the street kids often are ignored.

Svratiste's team of 13 social workers, psychologists and other experts have welcomed more than 1,400 children over the years. Money for the group's operations comes from donations. Some people regularly bring in clothes and other aid.

The group recently set up another center in a new part of town.

Usually, the two centers are open every day. But both closed down because of restrictions when the COVID-19 pandemic started in March. When Belgrade reopened in May, most of the children came back.

The Svratiste team has tried to help the children get to know their city by visiting playgrounds and theaters. An important effort has been to include them in the education system and make sure they stay.

Bosko Markovic, now 18, first came to Svratiste five years ago. With the center's help, he has finished high school and now wants to be a policeman, he told The Associated Press.

"They (Svratiste) have made me a better person," he said.

pandemic – n. a contagious disease that is in many countries

coordinator – n. someone who organizes people and things

psychologist – n. one who studies the mind