Update Required To play the media you will need to either update your browser to a recent version or update your Flash plugin.
By Olivia Liu
22 June, 2017


The United Nations says amphetamines and synthetic, or man-made, drugs are a new threat to communities in Asia.

UN officials have reported an increase in the production and use of such substances.

Two million pills of the drug methamphetamine were seized last weekend in northern Thailand. Drug traffickers tried to pass a road guarded by police in Chiang Rai province, but soldiers and police saw them. One trafficker was shot dead. 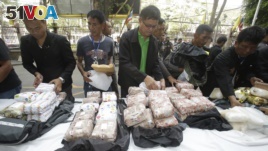 Thai policemen display drugs during a press conference in Bangkok, Thailand on March 24, 2016. They had seized 226 kilograms of crystalline methamphetamine and 8 kilograms of heroin. Thai police have arrested 15 Malaysians.

The incident took place near the Golden Triangle region of Thailand, Laos and Myanmar. That area is known for drug production.

Methamphetamine is a synthetic drug. It can affect behavior by changing how the brain thinks.

Synthetic drugs are responsible for many drug overdoses. Some overdoses are accidental. In others, the person may take large amount of the drug on purpose.

The United Nations Office on Drugs and Crime, UNODC, noted in a recent report that methamphetamine production and seizure rates have increased.

The report said that 287 million methamphetamine pills were seized in East and Southeast Asia in 2015. That is more than two times the amount of pills seized in 2011.

The UNODC said Myanmar, Laos, Cambodia and Vietnam were thought to have an increase in the use of methamphetamine pills in 2015.

UNODC data shows that the flow of illegal drugs continues to rise across the Greater Mekong Sub-Region, an area covering six countries.

Methamphetamine has been a leading product in the illegal drug trade for many years.

Synthetic drugs made in secret laboratories in Asia are sold in markets as far away as North America.

The United States is currently facing an opioid epidemic. Opioids are drugs that reduce pain. They are causing up to 60,000 deaths a year nationwide.

Inshik Sim is a UNODC information specialist in Thailand. He told VOA that while methamphetamine seizures increased nearly seven times over the past 10 years, heroin seizures are largely unchanged.

He said increases in methamphetamine use have also raised concerns in China, Singapore and Malaysia.

Olivier Lermet is a UNODC regional advisor. Lermet said in an email to VOA that amphetamine-type stimulants, a kind of drug, are easy to produce and are made in laboratories close to where the drugs are sold.

With a growing middle class and rising incomes, more people are turning to methamphetamines. Men, women, older adults and young people are buying the drug.

The UNODC report said organized crime groups play "a significant role in methamphetamine manufacturing and trafficking in the region." These groups include those in northeastern Myanmar, eastern China and Taiwan.

"In fact, seizures of crystalline methamphetamine at the borders of these four nations have increased rapidly in recent years," the UNODC said.

The United Nations has called on countries to have a more "balanced response to drugs." It wants countries to place more importance on treatment.

But Southeast Asia has been slow to reform its drug laws and some countries have launched a "war on drugs."

In the Philippines, police and unidentified gunmen have killed more than 7,000 people during the presidency of Rodrigo Duterte.

In Thailand, up to 70 percent of all 300,000 prisoners in jail were sentenced on drug-related charges.

But activists say there is need for reform to fight drug use.

They say programs that require drug users to go to special treatment centers should end. Voluntary community-based treatment and services should come into effect, they say.

Joe Maier is a Catholic clergyman who operates aid projects in Klong Toey, one of the poorest areas in Thailand. He said the government offers communities little support in providing activities to keep people away from drugs.

Maier said the government has never put money into community efforts. He said, "They never have dumped huge amounts of money into sports. The government does not see sports fields, athletics and sport programs and sports heroes as combating drugs," Maier said.

amphetamine – n. a drug known to cause changes in the central nervous system

pills – n. a small round object that contains medicine or drugs

rapidly – adj. happening in a short amount of time