Update Required To play the media you will need to either update your browser to a recent version or update your Flash plugin.
By Dan Novak
14 April 2022


Jerusalem's Church of the Holy Sepulchre is believed to be the site of Jesus's crucifixion and burial. It is one of the holiest sites in Christianity.

Pressed against a wall of the church is a stone that contains writings and marks created by centuries of pilgrims.

But the 2.5 x 1.5 meter stone turned out to be far more important when its other side was uncovered during recent repair work at the church. 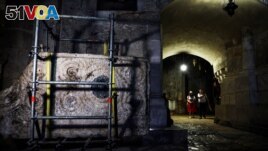 A stone slab said to be the decorated frontal of the Crusader-era high altar of the Church of the Holy Sepulchre. REUTERS/Ronen Zvulun

Researchers believe the design on the long-hidden part of the stone is evidence that it was once the front of a high altar. The altar is the center of a church where religious ceremony takes place. It would have been in use centuries ago.

On the stone would have been "pieces of glass, pieces of small, finely made marble," said Amit Re'em. He is an archaeologist for the Israel Antiquities Authority who researched the stone with Ilya Berkovich of the Austrian Academy of Sciences.

They said the design combines Classical, Byzantine and early Islamic art in which small pieces of colorful marble are used to fill in circular cuttings on the stone.

It stood at the sanctuary of the Church of the Holy Sepulchre, Re'em said.

Similarly decorated altars have been found inside churches in Rome dating to the 12th and 13th centuries, the researchers said.

They believe the stone fits with past archaeological findings and with pilgrims' accounts of the creation of the church. The Crusaders, a Christian military mission, founded the Church and formed its main altar in 1149.

The researchers' findings are expected to be released by the end of the year by Israel's Exploration Society.

Archbishop Aristarchos of Constantina is with the Greek Orthodox Patriarchate of Jerusalem. He welcomed such research at the church.

church — n. a building that is used for Christian religious services

pilgrim — n. a platform or table used as a center of worship in Christian ceremonies and services

altar — n. a raised place on which sacrifices and gifts are offered in some religions

marble — n. a kind of stone that is often polished and used in buildings and statues

sanctuary — n. a place where someone or something is protected or given shelter

resurrection — n. the event told about in the Bible in which Jesus Christ returned to life after his death