Update Required To play the media you will need to either update your browser to a recent version or update your Flash plugin.
By Susan Shand
05 June 2021


An illegal building project is threatening one of North America's greatest treasures: the ancient pyramids in central Mexico. The project may harm the remains of temples and about 24 other ancient buildings.

The illegal project is next to the Teotihuacan archeological area. Building anything new there is illegal. The owner of the land, however, has ignored orders from Mexico's antiquities organization (INAH) to stop for the past two months. Many Mexicans are angry that officials are failing to protect the ruins of Teotihuacan, a place visited every year by large numbers of people. 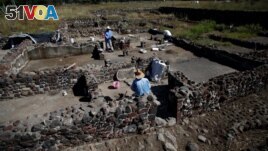 Men work at one of the multi-family apartment compounds at La Ventilla, one of the most extensively excavated neighborhoods in the ancient city of Teotihuacan, in San Juan Teotihuacan, on the outskirts of Mexico City, Mexico November 7, 2019. (REUTERS/Gustavo Graf )

Reuters news agency was unable to find or question the owner, whose name has not been made public.

Rogelio Rivero Chong is the director of Teotihuacan's archeological area. He said the failure by police to stop the project showed the property owner's "total impunity."

In late April, the INAH brought a complaint to the government. Federal prosecutors charged the owner with "damage to archeological patrimony." In recent weeks, the INAH documented ongoing building in the area by 60 workers. That information came from Mexico's Cultural Ministry. However, the prosecutors' office did not answer Reuters' questions about the case.

Teotihuacan is about 50 kilometers northeast of Mexico City. It once was home to about 100,000 people who mostly lived in colorful stone houses.

People lived in that city at about the same time that Mayan culture had reached a high level to the south. But Teotihuacan is known for its own art and architecture. It grew rich for a period of 600 years until about 550 because of trading with other cities. It had an economy built on creating goods such as clothing and metal blades, or knives.

Rivero Chong said officials have struggled for years to stop illegal building. The building is often done at night and local government officials often arrive too late, he said.

A tall wall surrounds the illegal building area. It is in what is believed to be one of the ancient city's oldest parts. A past archeological report said the area held at least three temples and 25 other ancient buildings.

Teotihuacan was named a world heritage site by the United Nations cultural agency, UNESCO, in 1987. The naming requires government protection of the area, said Rivero Chong.

In recent days, a number of leading archeological experts have asked the government to act. "For me, this really hurts," said Linda Manzanilla. She is a Teotihuacan archeologist with Mexico's National Autonomous University.

During one of her projects there in the 1980s, she found a housing complex in Oztoyahualco where workers once lived. It was next to a workshop near the three temples that are now under threat.

She said the latest illegal building is in an area just west of the Moon Pyramid. Near the illegal work, other research has found beautifully colored ancient buildings that were created around the central spaces of the city.

"It's very likely that there are very large complexes there," she said.

The Reuters News Agency reported this story. Susan Shand adapted it for Learning English. Mario Ritter, Jr. was the editor.

pyramid – n. a very large structure built especially in ancient Egypt that has a square base and four triangular sides which form a point at the top

archaeology – n. the study of past human life and of the things that people made in the past

prosecutor – n.one who represents the state when charges are brought against someone accused of a crime.

patrimony – n. things that are from the past; property that you receive from your father when he dies

heritage – n. the things that are inherited from a family member

complex –n. a group of buildings that are used for a certain purpose

complaint –n. a formal charge saying that someone has done something wrong

temple –n. a building for worship