Update Required To play the media you will need to either update your browser to a recent version or update your Flash plugin.
By Jonathan Evans
18 March, 2018


About 74,000 years ago, the Mount Toba volcano erupted on what is now the Indonesian island of Sumatra.

The eruption caused a worldwide environmental disaster. It may have destroyed ancient human populations in many parts of the world. But experts say some groups may have survived the disaster unharmed.

Earlier this month, scientists announced that they had found tiny pieces of volcanic glass from the Mount Toba eruption.

Their discovery, however, was 9,000 kilometers away on South Africa's southern coast.

Some researchers believe the eruption may have caused world temperatures to drop causing a so-called "volcanic winter" that lasted for many years.

Scientists suggest this cold period damaged ecosystems and reduced food resources for people around the world.

But, the researchers in South Africa found evidence that the hunter-gatherers there continued to thrive.

Pieces of volcanic glass were found in a rock shelter at a place called Pinnacle Point near the town of Mossel Bay. Ancient people lived, cooked food and slept there. They made tools out of stone, bone and wood. Glass pieces were also found in an area about 10 kilometers away.

The researchers said people lived in the rock shelter from 90,000 to 50,000 years ago. They found no sign that people left the area at the time of the eruption.

They said the seaside location may have provided a refuge. Marine food sources like shellfish may have been less affected than inland plants and animals to the environmental effects of the eruption. 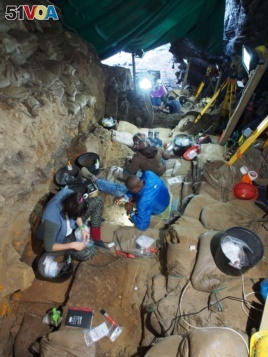 The Mount Toba eruption sent large amounts of volcanic particles into the atmosphere. The particles dimmed the sunlight and possibly killed many plants.

Scientists say it was the most powerful eruption in the past 2 million years. But they are divided over the eruption's effects. Some think it may have caused a human population collapse that became a near-extinction event. Others believe its effects were less severe.

Curtis Marean is a paleoanthropologist with Arizona State University's Institute of Human Origins and Nelson Mandela University's Centre for Coastal Palaeoscience in South Africa. He spoke to the Reuters news service about the findings.

He said, "On a regular basis through time, humans faced dire threats from natural disasters. As hunter-gatherers endowed with advanced cognition and a proclivity to cooperate, we were able to make it through this disaster, and we were very resilient."

He added, "But this may not be the case now with our reliance on our highly complicated technological system. In my opinion, a volcano like this could annihilate civilization as we know it..."

The researchers' findings were published in the journal Nature.

Will Dunham reported this story for the Reuters news service. Jonathan Evans adapted it for Learning English. Mario Ritter was the editor.

ecosystem –n. everything that exists in a particular environment

thrive –v. to grow or develop successfully; to flourish or succeed

location –n. a place or position

marine –adj. of or relating to the sea or the plants and animals that live in the sea

annihilate – v. to destroy something or someone completely

erupt – v. to send out rocks, ash, lava, etc. in a sudden explosion