Ancient Ruins in Iraq Open to Visitors After War Damage

Update Required To play the media you will need to either update your browser to a recent version or update your Flash plugin.
By Jill Robbins
16 September 2022


Once, the Iraqi town of Hatra was under the control of the Islamic State (IS) militant group. Now, visitors can walk peacefully through the UNESCO world heritage site in the northern part of Iraq.

Local leaders are trying to bring tourists back to the area after the invaders almost destroyed the ancient ruins.

Hatra dates back to more than 2300 years ago. It takes about two hours to drive there from Mosul, the former "capital" of IS. Iraqi and coalition forces recaptured Mosul in 2017. 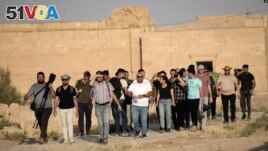 A group of tourists visit the ancient city of Hatra in northern Iraq on Sept. 10, 2022

On Saturday, the first group of tourists arrived. A private museum in Mosul arranged the trip for about 40 visitors, most of them Iraqis. They walked around the more than 2,000-year-old ruins as the sun began to go down.

The tourists took photos of themselves in front of walkways. They inspected the stone structures that the IS extremists damaged.

Luna Batota is a 33-year-old visiting Hatra with her Belgian husband. "It has great history," she said.

A native of Iraq, Batota left her homeland 24 years ago. This is the first time she has returned. Visiting Hatra caused her to have "mixed feelings," she said. "You see bullet holes; you see many empty bullets."

Hatra was an important religious and trading center under the Parthian empire. It had high, thick walls for defense and magnificent temples. The buildings combined Greek and Roman building designs with Asian decorations.

In 2015, IS released a video showing its militants destroying some of the sculptures at Hatra, firing guns at them and cutting them with tools. Some of the sculptures have been repaired. In February, officials showed three figures experts had returned to their earlier appearance.

Five years after the defeat of IS, Mosul and its surroundings have gone back to feeling more normal. But efforts to make repairs have met with problems and many areas still show the results of the fight against the extremists.

Many visitors — especially ones from the West — are now exploring the country. Some even go into Mosul.

The Mosul Heritage House is a private museum that opened in June.

It organized the tour of Hatra.

Those in the Hatra group were among the first visitors. They came at a time when the US, British and other governments are warning their citizens against travel to Iraq. They say there are still risks of terrorism, kidnapping, armed conflict and civil unrest.

An incident involving a British tourist, James Fitton, may have hurt tourism in Iraq. Fitton was arrested in March and condemned to 15 years in jail over pieces of pottery he picked up at an archaeological site. In July, a court reversed the decision and he flew back home.

Religious tourism to the Shiite holy cities of Karbala and Najaf has been growing, mostly from Iran.

Some major problems remain, however. Services and transportation for tourists are still basic in Iraq. Although the country is rich in oil, there has been much damage from the years of fighting.

Beriar Bahaa al-Din is a doctoral student in anthropology at the University of Exeter in Britain. He was part of the group visiting Hatra.

He said: "Mosul isn't only war, IS, terrorism. Mosul is a civilization, heritage, culture." It "should be full of tourists from across the globe."

site – n. the position or location of a town, building, or the like

tourist –n. someone who travels to a place for enjoyment and not for business

decoration – n. an addition that makes something more attractive

sculpture – n. a work of art that is produced by carving or shaping stone, wood, clay, or other materials

pottery – n. pots, dishes, and other objects which are made from clay and then baked in an oven until they are hard.

anthropology –n. the study of human, their society and culture