Update Required To play the media you will need to either update your browser to a recent version or update your Flash plugin.
By Kelly Jean Kelly
10 October, 2015


A few months ago, I told Anna Matteo I would write a Words and Their Stories program about animals that are also verbs. But I failed to keep my promise.

Instead of accepting responsibility, I told her I was too busy. And that I could not think of enough words. And that somebody else might want to write the program instead. 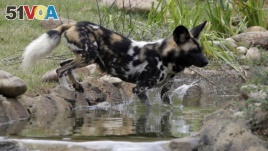 An African painted dog plays in the water at the Cincinnati Zoo in Ohio. (AP Photo/Al Behrman)

In other words, I tried to weasel out of it. A weasel is a small, brown mammal with a long body and short legs. It has a face a little like a mouse. A weasel does not appear very threatening; however, weasels can kill and eat animals four times their size.

Weasels sometimes dance before they kill their prey. Maybe that is why Americans say "weasel out" when we mean "try to avoid something in a dishonest way."

By the way, you can also weasel your way into something. That means try every trick to accomplish your goal, even if it something you really do not deserve.

She hounded me. She dogged me day and night. She told our colleagues about my bad behavior, and they began to badger me about the program,too.

As you can imagine, "to hound" or "to dog" people is to pursue them. For example, hunting hounds find and chase creatures such as foxes, birds and raccoons. And if a hound traps these animals, he will rarely let them go. Hounding someone usually involves asking something again and again.

"To badger" someone has a similar meaning. A badger is related to a weasel but is bigger and fatter. A badger is also not as violent as a weasel; however, if a badger seizes something in its teeth, it holds on tight and won't let go. Americans say they are badgering someone when they are insistent, but not aggressive.

Eventually, everyone's badgering affected me. Besides, I was worried Anna might rat me out and tell our boss I was an unreliable colleague. The word "rat" in this expression probably relates to a belief that rats cannot be trusted. Rats in the U.S. have a bad reputation, whether or not they deserve it.

Anyway, I finally sat down to write the program. Fortunately, like the animal that collects nuts and saves them for the winter, I had squirreled away some ideas. They included fish, such as in the expression "fish for compliments," and worm, as in "I will worm my way into his heart," as if I am tunneling with determination through the dirt.

Americans also shark, or fool, others, especially by pretending they are not good at something when they really are. And of course, we can bug people: bother them like a mosquito or a fly buzzing in an irritating way.

But now I have hogged Anna's program enough – selfishly taken more than I was really allowed or invited to. So I will close this episode of Words and Their Stories – but please do write to us if you ferret out a few more examples of animals that are also verbs.

We're going to bug you to leave a Comment below or on 51VOA.COM.

Kelly Jean Kelly wrote this program. Anna Mateo was the editor. The music at the end is "Hound Dog," by Big Mama Thornton.