Another Marcos Sworn in as Philippine President

Update Required To play the media you will need to either update your browser to a recent version or update your Flash plugin.
By Dan Novak
30 June 2022

In his inaugural speech, Marcos Jr. said his father accomplished many things. He also promised a better future for the country.

Marcos Jr., who is 64, won last month's election by a large majority. The win ended his wealthy family's years-long hunt to regain the presidency. The first Marcos was driven out of power in 1986. 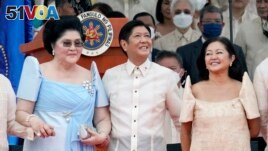 "We are here to repair a house divided, to make it whole and to stand strong again," the younger Marcos said in his speech.

He gave an emotional 30-minute speech. His sister Imee, a senator, and mother Imelda, a former congresswoman, sat nearby. Marcos Jr. thanked voters for giving him "the biggest electoral mandate in the history of Philippine democracy." He said the country would go far under his power.

The elder Ferdinand Marcos ruled for 20 years starting in 1965, almost half of it under martial law. Military rule helped him extend his power until his overthrow, sending his family into exile during a "people power" revolution.

Thousands of his opponents were jailed, killed or disappeared during his presidency. The family became very rich during his time in power, and billions of dollars of state wealth went missing. The Marcos family denies any corruption.

"I am here not to talk about the past. I am here to tell you about our future," Marcos Jr. said before thousands of cheering supporters.

"No looking back in anger or nostalgia."

Marcos Jr. defended his father's rule and said he would try to copy his successes.

"I once knew a man who saw what little had been achieved since independence ... but he got it done. Sometimes with the needed support, sometimes without, so, will it be with his son," he said.

Activists and survivors of martial law under his father protested Marcos Jr.'s inauguration. Bonifacio Ilagan is a 70-year-old activist who was jailed and tortured during the elder Marcos's rule.

"Wow is this really happening?" he asked. "For victims of martial law like me, this is a nightmare."

Marcos Jr. campaigned on the slogan "together, we shall rise again," in reference to his father's rule. Marcos' family and supporters have said his father's rule was a golden age in the Philippines.

Such anger is likely to follow Marcos Jr. during his six-year presidency, which begins at a time of serious crises.

The Philippines has been among the worst-hit countries in Asia by the pandemic. It has recorded more than 60,000 deaths. Long lockdowns have sent the economy into its worst recession since World War II. Poverty, unemployment and hunger have all worsened. Then, as the pandemic was easing early this year, Russia's invasion of Ukraine increased inflation around the world. Many now fear food shortages.

Marcos Jr. has promised to bring jobs and reduce prices in the country of 110 million people. Almost 25 percent of the population lives on less than $2 a day.

inaugurate — v. to introduce (someone, such as a newly elected official) into a job or position with a formal ceremony

accomplish — n. to succeed in doing something

mandate — n. the power to act that voters give to their elected leaders

martial law — n. control of an area by military forces rather than by the police

nostalgia — n. pleasure and sadness that is caused by remembering something from the past and wishing that you could experience it again

nightmare — n. a very bad or frightening experience or situation

slogan — n. a word or phrase that is easy to remember and is used by a group or business to attract attention

infrastructure — n. the basic equipment and structures (such as roads and bridges) that are needed for a country, region, or organization to function properly

task — n. a piece of work that has been given to someone : a job for someone to do