Update Required To play the media you will need to either update your browser to a recent version or update your Flash plugin.
By John Russell
20 June 2020


Scientists recently reported an unusual finding: the discovery of the second-largest egg known to exist. The egg, a 68 million-year-old fossil, was found on Seymour Island, off the coast of Antarctica.

The fossil is said to be about the size of a football – without the air inside. It measures around 29 centimeters by 20 centimeters. It is only a little smaller than the eggs of the large elephant birds of Madagascar, which died off some time ago, scientists said. 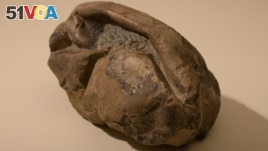 General view of a fossil egg of a marine reptile, found in Antarctica, in this picture obtained by Reuters on June 16, 2020. (UNIVERSITY OF CHILE/Handout via REUTERS)

While birds and many dinosaurs produced hard-shelled eggs, the Antarctic egg has a soft shell.

"This new egg is the very first fossil egg from Antarctica, and the largest soft-shelled egg ever discovered," said Lucas Legendre. He is a paleontologist at the University of Texas at Austin. He was the lead writer of the report published in the journal Nature.

Legendre compared the egg to a football that had lost its air. "One side is flattened, suggesting that is where it came in contact with the sea floor. Its eggshell is very thin, and poorly mineralized, like in the eggs of lizards and snakes," he said.

At the time the egg was made, the only creatures in Antarctica that were large enough to lay it were seagoing reptiles. The discovery of the fossil makes researchers question the idea that these animals only gave birth to live young.

Mosasaurs and plesiosaurs died off at the same time as the dinosaurs. They disappeared after an asteroid, a small, rocky object, reportedly struck Earth some 66 million years ago.

Scientists from the University of Chile and Chile's Museum of Natural History found the unusual fossil in 2011. Unsure about what it was, they called it "The Thing," after the name of a science-fiction film.

"When we arrived at camp, we asked the geologists that accompanied us if they had ever seen anything like it," said University of Chile paleontology researcher Rodrigo Otero. "Their expression of bewilderment said it all."

fossil – n. something (such as a plant leaf, skeleton, or footprint) that is from an animal or organism which lived in ancient times

dinosaur – n. one of many creatures that lived on Earth millions of years ago

paleontologist – n. a scientist that deals with the fossils of animals and plants that lived very long ago especially in the time of dinosaurs

journal – n. a magazine or other publication that specializes on a subject or activity

lay – v. to produce an egg from inside the body

reptile – n. a group of animals that includes snakes, crocodiles and turtles

species – n. a group of living organisms made up of similar individuals

geologist – n. a scientist who studies rocks and/or soil to learn about the history of the Earth and its life

bewilderment – n. the feeling of being unable to think clearly