Anti-EU Parties Win in Italy, Not Enough to Govern

Update Required To play the media you will need to either update your browser to a recent version or update your Flash plugin.
By Phil Dierking
05 March, 2018


Two anti-European Union parties appear to be the biggest winners in Italy's parliamentary elections on Sunday.

However, neither parties, Movimento 5 Stelle, or M5S, and Lega, have received enough seats in Parliament to govern the country alone.

Early projections say that M5S will be the largest single party with about 32 percent of the vote. The M5S did not even exist 10 years ago.

The right-wing coalition of Lega and Forza Italia appear to have earned 36 percent of the vote. Forza Italia is an established party of former Prime Minister Silvio Berlusconi.

It was also clear that Italian voters rejected the ruling Democratic Party's message that the economy had improved under its government. The pro-European Union party suffered the biggest losses this election.

As the results arrived, French far-right leader Marine Le Pen celebrated the strong showing of the Lega party. She tweeted: "The spectacular advance and top showing of the League [Lega] coalition led by our ally and friend Matteo Salvini is a new stage in the awakening of the people!"

The results of Sunday's elections will not be seen as good news for migrants in Italy. The two winning parties have supported efforts to stop migration and increase deportations. 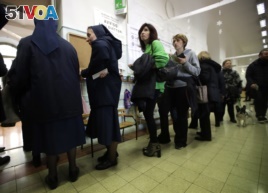 People line up at a polling station near the Vatican, in Rome, March 4, 2018.

The outcome of the vote, leaving no party with a clear majority, creates political uncertainty for Italy.

Some political experts say Italy would face a political revolution if M5S and the Lega formed a coalition government. But others think it is not likely to happen. An advisor to Italy's President Sergio Mattarella said, "many in M5S just won't sit at the same table as the Lega."

It is also possible that Italy may be left with the same Prime Minister as before the election, Paolo Gentiloni. The 63-year-old Gentiloni is widely seen as one of the few politicians with the diplomatic ability to manage current Italian politics.

Some experts say Mattarella will likely pick Gentiloni to lead a coalition government if the winning parties cannot form a government among themselves.

The new Italian parliament will meet for the first time on March 23. And President Mattarella is not expected to open formal talks on forming a government until early April.

Jaime Dettmer wrote this story for VOA News. Phil Dierking adapted it for VOA Learning English. Hai Do was the editor.

deportation - n. to force (a person who is not a citizen) to leave a country