Update Required To play the media you will need to either update your browser to a recent version or update your Flash plugin.
By Jim Dresbach
15 March, 2016


In Germany, a political party opposed to immigration has won seats in three elections on Sunday.

The Alternative for Deuthschland (AfD) party won spots in southwestern Germany, which is rich, and in Saxony-Anhalt, which is poor.

The party was started three years ago. It has seats in half of Germany's 16 state parliaments, according to German state TV. 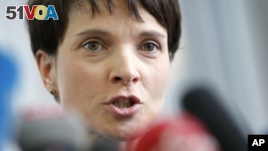 Frauke Petry, Chairwoman of the AfD, Alternative fuer Deutschland (Alternative for Germany), party addresses the media during a press conference in Berlin, Feb. 22, 2016.

An official with the AfD party said, "People want an alternative; they want a real opposition, and we want to take on that task."

The loss is a setback for German Chancellor Angela Merkel. She favors an open immigration policy.

Merkel is pressured to close Germany to migrants. Merkel is trying to reach an agreement between the European Union and Turkey to slow the flow of migrants.

VOANews reported on this story. Jim Dresbach adapted this story for Learning English.

Kathleen Struck was the editor. We want to hear from you. Write to us in the Comments Section or visit 51VOA.COM.

alternative - n. something that can be chosen instead of something else

task - n. a piece of work that has been given to someone; a job for someone to do

favors – v. helping someone or something in an unfair way; to approve or or support something

migrants – n. a person who goes from one place to another, especially to find work