Update Required To play the media you will need to either update your browser to a recent version or update your Flash plugin.
By Christopher Jones-Cruise
23 June, 2016


This is the second article in a three-part VOA series on Islamist extremism in the United States.

The likely Republican presidential nominee -- Donald Trump -- has called for a ban on Muslims entering the United States.

Earlier this month, in a speech the day after the worst mass shooting in modern American history, Trump said, "the bottom line is that the only reason the killer was in America in the first place was because we allowed his family to come here. That is a fact, and it is a fact we need to talk about."

If such a ban had been in place in the 1980s, Imran and Amina Bashir would probably still be in Pakistan. 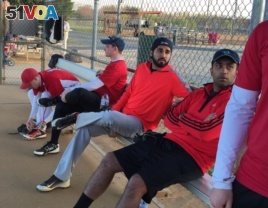 Danish Bashir sits in the dugout at a softball game in Springfield, Virginia. (C. Presutti/VOA)

Today, the Bashirs live in Northern Virginia. Imran and his son Danish work in the computer technology industry. His other son, Danyiel, is studying to be a doctor of pharmacy at the University of Baltimore.

At the Bashir home, Imran is cooking dinner while Danish talks with friends on social media about a television program that is popular with many young Americans.

Imran told VOA he speaks to many people about his religion. One reason, he says, is because he is worried about how some politicians talk about Muslims.

"We are a middle-class family. We want to just be normal people."

His son Danish says he does not understand Trump.

"I am still an American, too. And being an American is about being together, so my view is different from his. His hatred (of IS) is correct. But pointing to people in your own back yard? That doesn't make any sense to me."

Danish says he is lucky to live in a mixed neighborhood and have friends from many backgrounds.

"There is no segregation in terms of that. It's equal opportunity. And that is what we have in America. We can come from nothing into becoming something great and achieving our goals. And that is why my parents came to America," he says.

Muslims in the U.S.

The Bashirs and other families show the reality of Muslims in the United States.

More than 3 million Muslims live here. In fact, a recent Pew Research Center report predicted Islam will be the second-largest religion in the United States by 2050.

While some U.S. cities have areas that are mostly Muslim, the majority of Muslims live in mixed neighborhoods – like the one where the Bashirs raised their children.

The Pew study also says a higher percentage of Muslims in the U.S. are better educated and earn higher wages than those who belong to most other religions.

A ban on Muslims?

Yet some politicians describe a picture of Muslims in the United States as isolated and dangerous.

Last March, after the terrorist attacks in Belgium, Senator Ted Cruz, said, "We need to empower law enforcement to patrol and secure Muslim neighborhoods before they become radicalized."

Around the same time, Donald Trump began calling for a ban on Muslims entering the country.

He suggested that the Muslim faith supports hatred and violence. "Where this hatred comes from and why, we will have to determine," he said.

Many legal and terrorism experts quickly called Trump's call for a ban on Muslims entering the U.S. unconstitutional and counter-productive.

Seth Jones works at the RAND Corporation, a study group. He is an expert on terrorism. He says banning Muslims from entering the country is a waste of resources.

Jones also says a ban against all Muslims does not deal with the cause of the problem.

"This isn't about Islam, this isn't about Sunni Islam. This is about a very small percentage of individuals who hold what we call a Salifi-jihadist world view to establish a global caliphate," he told VOA.

In other words, Jones says a small, unusual group of Muslims wants the entire world to operate under a conservative Islamic government.

Jones says a better solution than a ban on all Muslims is to ask those who oppose Islamic extremist violence to help identify people who might do harm.

Lorenzo Vidino works at The Center for Cyber and Homeland Security at The George Washington University.

"The message ISIS sends out (to Muslims) is that the West hates you, the West is at war with Islam. You do not belong in Western society," he says.

As a result, says Vidino, Muslims who used to feel at home in the U.S. may decide to support the Islamic State and act against their country.

In the third part of this series, VOA explores the question "What is counter-terrorism?"

back yard – expression an area near where you work or live

counterproductive – adj. not helpful; making the thing you want to happen less likely to happen

worldview – n. the way someone thinks about the world