Update Required To play the media you will need to either update your browser to a recent version or update your Flash plugin.
By Dan Novak
06 November 2022


A new study carried out in the West African nation of Mali found that an experimental drug protected adults against malaria for at least six months. The one-dose drug is the latest possible treatment for the disease spread by mosquitos.

The World Health Organization is releasing the first malaria vaccine for children. But it is just 30 percent effective and requires four doses. 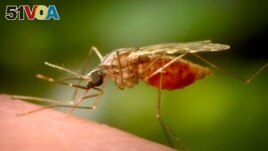 This 2014 photo made available by the U.S. Centers for Disease Control and Prevention shows a feeding female Anopheles funestus mosquito. The species is a known vector for the parasitic disease malaria. (James Gathany/CDC via AP)

The new study tested a very different idea. The drug gives people a large dose of lab-made malaria-fighting antibodies. The vaccine depends on the immune system to make enough of those same infection-blockers after vaccination.

Dr. Kassoum Kayentao is with the University of Sciences, Techniques and Technologies in Bamako, Mali. He helped lead the study in two small villages in Mali. He said the "available vaccine doesn't protect enough people."

During malaria season in some places in Mali, people are bitten by infected mosquitoes on an average of twice a day.

The experimental antibody was created by researchers at the U.S. National Institutes of Health. It is given intravenously, or directly into the veins.

The drug would be difficult to release to a large amount of people. But scientists are also testing a shot version of the treatment, which would be easier to give out.

The U.S. government research was published Monday in the New England Journal of Medicine and was presented at a medical meeting in Seattle.

The antibody works by breaking the life cycle of the parasite, which is spread through mosquito bites. It targets parasites early before they enter the liver, where they can grow and multiply. The drug was created from an antibody taken from a volunteer who received a malaria vaccine.

The research involved 330 adults in Mali. The study participants got either one of two different antibody doses or a placebo – a substance given to a patient like a drug but has no physical effect on the patient. All participants were tested for malaria infection every two weeks for 24 weeks. Anyone who got sick was treated.

Protection might last during the several months of malaria season.

The cost is not yet known. But one estimate suggests lab-made antibodies could be given for just $5 per child per malaria season.

Dr. Johanna Daily is with the Albert Einstein College of Medicine in New York. She was not involved in the study. She said lab-made antibodies are used to treat cancer, autoimmune diseases and COVID-19.

"The good news is now we have another, immune-based therapy to try to control malaria," she said.

antibody — n. a substance produced by the body to fight disease

vein — n. any one of the tubes that carry blood from parts of the body back to the heart

cycle — n. a set of events or actions that happen again and again in the same order

multiply — v. to increase greatly in number or amount

participant — n. a person who is involved in an activity or event

therapy — n. the treatment of physical or mental illnesses