Update Required To play the media you will need to either update your browser to a recent version or update your Flash plugin.
By Hai Do
30 June 2020


The Associated Press reports that top White House officials knew in early 2019 about intelligence findings that Russia offered money to the Taliban for the deaths of Americans in Afghanistan.

That is one year earlier than other news organizations have reported, including The New York Times.

The AP said its information about the bounties came from U.S. officials with knowledge of classified intelligence. The officials provided the information on the condition that they not be identified. 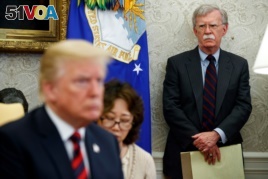 FILE - U.S. President Donald Trump, left, conducts a meeting in the Oval Office of the White House in Washington, May 22, 2018, as then-National Security Adviser John Bolton, right, looks on.

The AP also reported Sunday that information about Russian bounties was in another presidential daily briefing this year, and that current national security advisor Robert O'Brien had discussed the issue with Trump.

O'Brien denies the AP report. He said Monday that the intelligence information about Russian bounties has "not been verified." But he added that the administration has "been preparing should the situation warrant action."

The White House did not answer AP's questions about if Trump or other officials knew of Russia's reported actions in 2019. The White House said Trump has not yet been briefed on the intelligence finding because it has not been fully confirmed.

How did intelligence find out?

Concerns about Russian bounties gained attention this year after members of the special forces recovered $500,000 from a Taliban military camp. Members of the U.S. intelligence community suspected that Russia had offered the money to the Taliban and related groups.

The New York Times first reported that information. Sources told the AP that career government officials also developed several possible actions against Russian aggression in Afghanistan. But the Trump administration has not approved any action.

Officials said the intelligence in 2019 and 2020 surrounding Russian bounties came from captured Taliban militants from different areas and different tribes.

Dmitry Peskov, a spokesman for Russian President Vladimir Putin, denied that Russia had offered payments to the Taliban in exchange for targeting U.S. and coalition forces.

The Taliban told VOA on Tuesday that it held a video call with U.S. Secretary of State Mike Pompeo. The Taliban is currently in negotiations for a peace deal with the United States. Its spokesman said the reports are "not true," adding "We have already rejected that." He said the group would not permit "anyone to use Afghan soil (to launch attacks) against any country."

The Trump administration held separate briefings on the issue for Republican and Democratic lawmakers in Congress.

On Tuesday, Democratic lawmakers said White House officials offered "their perspective" at a time when lawmakers need to hear directly from the intelligence community.

Democratic Congressman Adam Schiff, chair of the House intelligence committee, said that Trump's defense that he has not been briefed about the issue is inexcusable.

A day earlier, Republican Ben Sasse, a member of the Senate intelligence committee, said Congress should aim to find out who knew what and when. He said, "Did the commander in chief know? And if not, how the hell not?"

The AP reported that the U.S. is investigating whether Americans died as a result of the Russian bounties. Officials are centering their efforts on an April 2019 attack that killed three U.S. soldiers as they returned to Bagram airfield.

One of those soldiers was Corporal Robert Hendriks of Locust Valley, New York. His father told the AP that even unconfirmed talk of Russian bounties should have been immediately addressed.

The Associated Press reported this story. Hai Do adapted for Learning English with additional information from VOA News. Ashley Thompson was the editor.

bounty - n. a amount of money given to someone as a reward for action against someone else

classified - adj. kept secret from all but a few people in the government

briefing - n. a short meeting to give and receive information

verify - v. to prove, show or state that something is true

perspective - n. a way of thinking about and understanding something