Update Required To play the media you will need to either update your browser to a recent version or update your Flash plugin.
By VOA
27 March, 2019


Apple has announced several new product offerings, including television and gaming services, an expanded news app and a credit card. The new services were announced this week during a launch event at Apple's headquarters in Cupertino, California.

The event marked a clear new direction by the technology company, as it seeks to expand its offerings in answer to dropping demand for its iPhone.

Past Apple launch events centered mainly on new devices ready for release. But unlike at earlier events, several of the announcements this week did not include exact launch dates or pricing information.

One of the new offerings will increase the number of channels available on the company's existing Apple TV service. The new lineup will include popular channels that people often get through cable television providers. The company says the new choices can be bought individually on demand, much like how its iTunes service works. The offerings can be watched on any Apple devices. 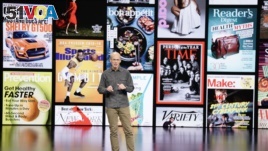 The company said the new Apple TV was designed to bring many channels, shows and movies from different places together, into one searchable app. For example, people already using services like Amazon's Prime Video, Hulu or ESPN+ can use the new system.

The new Apple TV app will be available in May.

In addition, Apple announced it will launch its own television and movie streaming service called Apple TV+. The company said the subscription service will include Apple-produced programming and movies only available for its users. Many industry experts see this offering as a direct effort to compete with major international streaming services like Netflix.

Apple CEO Tim Cook said at the event that the company has always believed "deeply in the power of creativity." He said one goal of Apple TV+ is to show the work of some of the world's greatest creators and performers.

"So we partnered with the most thoughtful, accomplished and award-winning group of creative visionaries who have ever come together in one place to create a new service unlike anything that's been done before. Apple TV+"

Cook said Apple TV+ will be available this fall on the Apple TV app. No pricing was announced. Winfrey, who spoke at the event, described Apple as "the company that has reimagined how we communicate."

"I am proud and honored to be a part of this new platform, where I can connect with people around the world to share meaningful ways to create positive change."

She added that she liked the company's huge reach. "They're in a billion pockets, y'all," she said. That number refers to the estimated 1.4 billion Apple devices in use worldwide. Winfrey announced she is working on two documentaries for Apple TV+ and has plans to launch a worldwide book club with the company.

Apple also announced that its free Apple News app will now come in a pay version called Apple News+. This new service will offer users digital versions of more than 300 magazines and some newspapers for $9.99 each month.

The company also used the event to introduce a new credit card, made of titanium, called the Apple Card. The digital version of the card lives on a user's device in the Apple Wallet app. The physical version has no numbers at all. Apple says the card is protected by Face ID or Touch ID. This means that if it gets stolen, another person should not be able to use it. The card will have no yearly fee and also no late payment fees.

The company also announced Apple Arcade, a game subscription service for phones, tablets and desktop computers. The service, which is to launch in the fall, will offer more than 100 games only available to Apple users. The cost was not announced for the service.

Bryan Lynn wrote this story for VOA Learning English, based on reports from the Associated Press, Reuters, Agence France-Presse and Apple. Ashley Thompson was the editor.

streaming – n. content being sent to televisions or devices directly from the Internet

subscription – n. paying an amount of money to receive a service or product

accomplished – adj. being skillful or talented i

proud – adj. much pleased; feeling very good about someone or something

platform – n. a program or set of programs that controls the way a computer works and runs other programs

y'all – used as a contraction of you all