Update Required To play the media you will need to either update your browser to a recent version or update your Flash plugin.
By Bryan Lynn
18 October, 2017

Wozniak last week announced creation of what is being called an online university, known as Woz U. In the beginning, Woz U will only offer classes through electronic devices connected to computers. Later, the school plans to open up classrooms in more than 30 cities so students can attend in person.

Steve Wozniak founded Apple Computer, with Steve Jobs, in 1976. They developed and hand-built the company's first computer, the Apple I, mainly working in Jobs' home, near San Jose, California. 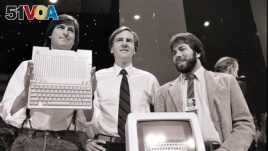 Throughout its history, Apple has been seen as one of the most innovative technology companies. In addition to computers, it developed industry-changing products, such as the iPod and iPhone. According to Forbes, Apple is currently the ninth largest public company in the world.

Steve Wozniak left Apple in 1985. He has said he left because he did not agree with some of the company's business goals at the time. Since then, he has been involved with several other technology companies.

Wozniak has been a supporter of local education in areas where he has lived. He even taught computer classes for young people and has donated technology equipment to schools.

Now Wozniak is teaming up with a for-profit company to provide programs for students interested in learning about technology.

"Our goal is to educate and train people in employable digital skills without putting them into years of debt," Wozniak said in a statement. He added that his goal is to inspire and prepare "the next generation of innovators" to join the workforce of the future.

"People often are afraid to choose a technology-based career because they think they can't do it," he said. "I know they can, and I want to show them how."

Woz U currently offers training in software development and computer support. The school plans to add several other subjects in 2018. Students who finish the programs will receive a certificate of completion upon graduation.

Wozniak says the school will also work with technology companies to help them identify new workers and train the ones they already have.

Bryan Lynn wrote this story for VOA Learning English. His story was based on information from the Woz U website and other sources. George Grow was the editor.

certificate – n. document that is official proof that something happened