Update Required To play the media you will need to either update your browser to a recent version or update your Flash plugin.
By Bryan Lynn
11 September, 2019

But at the launch event this week, the company announced a number of new products without raising prices. In the case of Apple's low-end iPhone, the price was lowered from the current model.

Apple also reported that the price for its new video service will be well below competing companies like Netflix and Disney Plus. And the company said it plans to launch a video game subscription service on September 19.

Industry experts say Apple's price-freeze and expansion into a pay video service appear to be an answer to a drop in iPhone sales worldwide the past few years. It has become more difficult for Apple to get people to pay for new devices that sell for $1,000 or more. 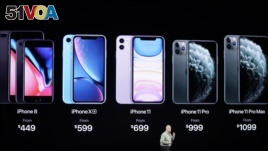 This year, iPhone shipments are down 25 percent, technology researcher IDC reported. The drop has put more pressure on Apple to generate earnings from service offerings like music, video and gaming. The company was able to raise its services revenue 14 percent to nearly $23 billion during the first half of this year.

The main difference for the iPhone 11 is that it has two back cameras, including a lens designed to take extra wide images. This model starts at $699. The iPhone 11 is meant to replace the iPhone XR, which has a higher price of $749.

The iPhone 11 Pro sells for $999. It has three cameras on the back, including one for extra wide photographs and one for telephoto. The iPhone 11 Pro Max also has the three-camera design and the biggest display of all the models. It starts at $1,099, the same price as the iPhone XS Max from last year.

The company also showed off new camera tools, including one to improve picture quality in low-light conditions and a new setting aimed at helping capture human subjects.

Apple says all the new iPhones are made with long-lasting batteries. Users of the iPhone 11 Pro Max can expect the power to last up to 5 hours longer than the iPhone XS Max, the company said.

All the new models will begin shipping on September 20.

The launch event also included new versions of the Apple Watch and iPad.

The new Series 5 watch now has an always-on display, which many competing devices already have. The Series 5 will come in new case designs, such as titanium and ceramic. And it will work with a new Compass app for directions.

Apple is offering a new low-end model iPad with a larger display size, starting at $329. It also launched a new iPad Pro, which the company calls "the most advanced iPad ever." That model – designed to compete with laptop computers - starts at $799.

One big announcement was that the company plans to launch its new Apple TV Plus video service on November 1. Users will pay $4.99 per month. In the first few weeks, the service will have nine Apple-produced shows and movies – some with major Hollywood stars - with more to be added each month.

The Apple TV Plus starting price is below Netflix's rates of $8.99 to $15.99. The offer is also lower than the planned Disney Plus video service, which is set to launch November 12 for $6.99 a month.

Apple is offering Apple TV Plus free for one year to buyers of a new iPhone, iPad, Mac or iPod Touch.

Apple also announced the September 19 launch of its Apple Arcade video game service. The service, costing $4.99 a month, will offer unlimited use of more than 100 different games.

One thing not announced at the launch event was when Apple planned to release iPhone models that will support the new 5G wireless system.

Apple competitors, including Samsung, are already offering 5G device versions at a higher cost. But industry experts say Apple is currently in a "holding pattern" for the new technology. They say 5G iPhones are not expected to be released until next year.

So users will have to wait until 2020 to see if Apple goes back to higher pricing for its latest 5G models.

Bryan Lynn wrote this story for VOA Learning English, based on reports from Apple, The Associated Press, Reuters, Agence France-Presse and online sources. George Grow was the editor.

subscription – n. an amount of money paid to regularly receive a product or service

generate – v. to bring into existence; to create

revenue – n. the amount of money produced; the money returned by an investment

laptop – n. a computer small enough to be carried around and used when the person is sitting

pattern – n. a particular way something is done or repeated