Update Required To play the media you will need to either update your browser to a recent version or update your Flash plugin.
By Dan Friedell
10 September 2022


Apple and some other technology companies say they are aiming to keep prices level this year.

The maker of the popular iPhone announced a list of new products recently. In addition to adding safety features such as emergency satellite connections to the new products, the California-based company stayed away from major price increases on most products.

The popular mobile phones create about half of the company's yearly sales. 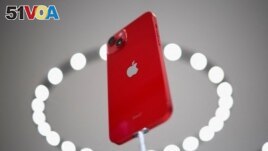 The new iPhone 14 Plus is exhibited at an Apple event at their headquarters in Cupertino, California, U.S. September 7, 2022. REUTERS/Carlos Barriaa/File Photo

The new iPhone 14 models are priced the same as last year's iPhone 13s. They will be $799 and $899. However, the company dropped its least costly product, which means the lowest price iPhone is now $100 more than last year.

The main changes to the phones are related to the quality of the pictures they take and longer battery life. Only the "pro" phones got new computer chips.

Ben Bajarin works for market research company Creative Strategies. He said the new safety features are "super-interesting" and add value to the phones. He said the phone's ability to connect to a satellite so it can make an emergency call from places far away from cities, "make(s) you not just want the products for yourself, but for loved ones."

The phones also have motion-sensing technology that permits them to recognize an accident, such as a car crash, and call for help.

They are known as "SOS features." The letters S-O-S are known around the world as a request for help.

The phones will also be able to use the "FindMy" program to share where they are using a satellite.

The special service will come for two years at no extra cost. It is not known how much the satellite connection will cost after that.

Apple also provided new watch information. The company is adding features that may appeal to athletes who do things like run or ride bicycles long distances. One watch, called the Ultra, will have a longer battery life so it can follow an athlete's progress during events that take many hours to finish. They also will be able to better resist water than in the past. The watches can also call for help if the user has been in a crash.

The watches can sense changes in body temperature. The company says they will be able to tell women if they are ovulating, which is the best time to get pregnant. Apple said it will make sure that information stays private.

Phones and watches make up the majority of Apple's business. The main news from this year's release had to do with prices and safety features, but no new products.

In the future, some experts think Apple will release some kind of "mixed reality" headset, which could come as soon as next year. This suggests the device would let users combine the computer-created world with the real one.

feature –n. an interesting or important quality or ability of a product

athlete –n. a person who is trained and good at sports, games or exercise

mixed-reality –adj. a combination of the digital and physical worlds