Update Required To play the media you will need to either update your browser to a recent version or update your Flash plugin.
By Bryan Lynn
12 September, 2018


Apple announced three new iPhones and improved health features for its watches during a launch event on Wednesday.

The event was held inside the Steve Jobs Theater at Apple's headquarters in Cupertino, California.

One of the new phones is a larger version of the company's pricey iPhone X, which launched last fall. The new model is called iPhone Xs Max. It has a screen size of 16.5 centimeters, making it Apple's biggest smartphone yet.

As with the iPhone X, the Xs Max has a screen that runs from edge to edge to provide more viewing space. The phone's screen also needs no backlight, so black and other colors are supposed to appear truer than on previous devices.

Another new model, called iPhone Xs, is smaller than the iPhone 8 Plus, but actually has a larger, 14.7 centimeters, viewable display. 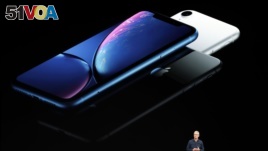 The company says both the Xs and Xs Max models are equipped with an improved version of Face ID, which first launched with the iPhone X. Face ID permits users to unlock their devices just by looking at them. The iPhone Xs is priced at $999.

Apple says the Xs and Xs Max versions include the "most powerful chip" found in any smartphone.

In addition, the devices use a "dual-camera system" the company says produces much-improved picture quality. This system combines faster processing speeds with what Apple describes as a "neural engine." With these tools working together, the camera can automatically improve things like lighting, sharpness and depth of field, Apple says.

The third newly launched device is called iPhone XR. Made of aluminum, it has an edge to edge LCD display measuring 15.5 centimeters. The iPhone XR comes equipped with Face ID, but only a single lens camera. It is designed with fewer features than the other models to cut costs. The iPhone XR sells for $749.

The new iPhone models will be available in the coming weeks in the United States and many other parts of the world.

At its launch event, Apple also announced new versions and expanded features of its Apple Watch devices. The new Apple Watch Series 4 will be a bit larger than current models, coming in 40 millimeter and 44 millimeter versions. Apple says this will provide a screen that is about 30 percent larger than the Series 3 models. The Series 4 will also be built with a stronger back made of ceramic.

Some of the Apple Watch's most popular features deal with tools to help users improve their health and fitness. Several improvements were announced related to these features. For example, the Series 4 will be able to detect when someone has an irregular heartbeat and send a warning message to the user.

Apple said the devices can also gather more detailed heart health information known as an electrocardiogram. The watches also have a feature that is supposed to detect when a person falls. Apple says the watch can even automatically make a 911 emergency call for help if the person does not begin moving within a minute.

Apple also used the launch event to announce that its new iPhone X devices will be equipped with dual SIM card technology. This means the devices will be able to hold both a nano-SIM and eSIM inside.

An eSim can be controlled virtually and does not have to be placed physically inside the phone. This dual SIM technology can permit users to use two phone lines with their device. It will also make it easier for users to change phone service carriers without having to get new SIM cards directly from company providers.

Apple announced that new phones launched in China will be equipped with spaces for two physical SIM cards, since eSim technology has not fully developed there.

The technology had already been available on some of Apple's iPad and Apple Watch devices. Apple CEO Cook said the company is already working with phone carriers on how the new technology will be used.

Bryan Lynn wrote this story for VOA Learning English, based on the Apple launch event, the Associated Press. Hai Do was the editor.

neural – adj. a system of hardware and/or software patterned after the operation of neurons in the human brain

depth of field – n. the distance between the nearest and the furthest objects that give an image considered in focus in a camera

ceramic – n. material made by shaping and heating clay

detect – v. discover or notice something

irregular – adj. not being steady or regular