Update Required To play the media you will need to either update your browser to a recent version or update your Flash plugin.
By Mario Ritter
02 August, 2018


Apple has become the first American company to have the total value of its publicly traded stock reach $1 trillion. Stock in the technology company reached the huge number during trading on Thursday.

If Apple were a nation, it the world's seventeenth largest economy.

Steve Jobs and a few other people created Apple 42 years ago in Cupertino, California.

By 1997, the company had fallen on hard times and shares were worth just a few dollars. If someone had bought $10,000 of the stock at that low point, their investment would now be worth $2.6 million. 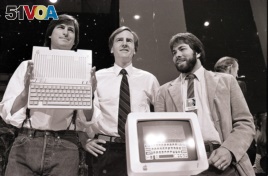 The current price of a share in the company is about $207 dollars. Stocks experts say that is a reasonable amount when the company's earnings are considered.

Apple's rise in recent years has signaled the strength of the technology industry. Apple became part of the Dow Jones Industrial Average, a widely used measure of stock prices, in 2015.

And Apple faces strong competition from other technology companies. It could lose its top spot to Amazon, based in Seattle, Washington. The online sales company now has a market value of $880 billion dollars.

The company known for iPhones and the Mac computer is not the first publicly traded company to reach the $1 trillion mark. Thomson Reuters information shows that Chinese oil company PetroChina reached that level in 2007, although it has since lost much of that value.

Technology companies like Apple, Amazon and Alphabet—the parent company of Google—appear to have taken the lead in high market value.

But a traditional industrial business, The Saudi Arabian Oil Company known as Aramco, could surpass Apple if it carries out plans to offer its stock to the public.

Mario Ritter adapted this story from VOA News and wire reports. Caty Weaver was the editor.