Update Required To play the media you will need to either update your browser to a recent version or update your Flash plugin.
By Dan Friedell
27 April, 2016


How long have you had your Apple iPhone or computer? If you have not replaced that product in the last two or three years, you may be part of the reason for Apple's falling sales numbers.

Apple is the world's most valuable company. Its yearly growth trend started in the early 2000s, with exciting new computers and a portable music player known as the iPod.

The company continued to grow, with the introduction of the iPhone smartphone. Then, it introduced the iPad tablet. 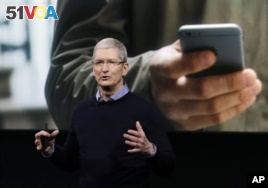 Sales of Apple products grew every year for 51 straight quarters. That all changed on Tuesday, when the company reported a drop in sales. Sales for the first quarter of 2016 dropped 13 percent.

The news caused Apple's stock to drop, too. The company's shares were down by about 8 percent in after-hours trading.

Some experts say the struggling Chinese economy may be to blame for Apple's weaker sales. The company's report shows sales were down in China, Taiwan and Hong Kong by a combined 26 percent. In the past, Apple was able to depend on sales growth in those markets.

Apple's Chief Executive, Tim Cook, says the smartphone market is not growing because of the slowing economies in some countries.

But other experts say Apple is no longer regularly producing exciting products. People who bought new Apple laptops or smartphones in the last two or three years do not feel like they need to buy the latest products.

Rob Pegoraro is a technology writer for USA Today and Yahoo. He says he still likes to use the Apple products he owns but, there is nothing "revolutionary" right now.

"You got a lot of people upgrading to the iPhone 6 and the iPhone 6 plus. The 6s and the 6s Plus, they're better, but as the names would suggest, they're not exactly revolutionary. Normal people don't buy new phones every year. "

Pegoraro also says that Apple did not really have a bad quarter. The company still makes a lot of money from the products it sells. It is just not growing anymore.

"Their gross margin was 39.4 percent compared to 40.8 percent. I struggle to think of how many other industries or companies could pull down those kind of profit margins for over a decade straight."

Pegoraro says there is not much more room for improvement in the products Apple makes. For example, the company could create an iPhone with a battery that lasts five days. "That would be amazing, but you're running into the laws of physics there," Pegoraro says.

The Associated Press news agency reports that there are still parts of Apple's business that are growing. For example, there are 500 million iPhones in use. Those phones need cloud storage, apps and music. That part of the company is worth $6 billion per quarter now, and that is an increase of 20 percent over the same period last year.

There are also concerns that the Apple Watch, which came out a year ago, did not have better sales. But the watch actually sold more than twice as many units in its first year compared to the first iPhone in 2007.

Right now people can only guess what is next for Apple. Some think the company will make an electric car. It is building a new headquarters that has been described as a spaceship or flying saucer by some observers.

Pegoraro warns to not underestimate Apple just because of this small drop in sales.

"This company, their problem is they made a lot of money, just not more money than they made the last quarter. You know, if that's failure, then I should only hope to be just as much of a disaster!"

Do you own an Apple product? Are you planning to replace it soon? We want to know. Write to us in the Comments Section or on 51VOA.COM.

units – n. an individual item of one of the products that a company makes and sells

margin – n. an extra amount of something (such as time or space) that can be used if it is needed

revolutionary – adj. causing or relating to a great or complete change