Update Required To play the media you will need to either update your browser to a recent version or update your Flash plugin.
By Bryan Lynn
05 June, 2019


Apple has announced new software and privacy tools as it seeks to expand service offerings to its estimated 1.4 billion device users.

The announcements came during Apple's Worldwide Developers Conference happening this week in San Jose, California. The changes are another clear sign of Apple's attempts to expand its offerings to make up for dropping iPhone demand worldwide. iPhone sales fell sharply during the past two financial quarters.

For iPhone users, Apple announced the launch of its iOS 13 operating system, to be available this fall. The new version comes with several new features.

One is a setting for the iPhone called "dark mode." The feature – already available on Mac computers – turns the background of the device black. Apple says dark mode is designed to make everything on the screen easier on the eyes. It can be used all the time or set to come on at a specific time. 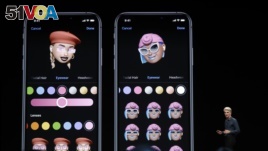 iOS 13 also offers iPhone users a way to avoid using sign in services of Facebook and Google when using apps. Instead, users can sign in with their Apple ID. Apple says the feature aims to respect the privacy of users by not collecting tracking information through the apps or services. Facebook and Google collect such user information for its advertising business.

In addition, iOS 13 includes a redesigned Maps app that provides "more detail about the world around you." It has a feature that lets users look at actual street photos and move through streets within the app. The feature is very similar to Google's Street View, which has been available for years.

The new iPhone OS also adds improvements to Apple's Siri personal assistant system. The company says the new Siri has a more natural voice and will work with map and music apps.

Apple announced the iPad will get its own operating system to replace the existing one made for iPhones. The new OS is designed to make it easier for iPad users to use the device to do more of the things a laptop computer can do.

Apple also introduced several new apps for its Apple Watch device to be included with the new WatchOS 6 system. Among these are apps that operate independently without the need to be linked to a user's iPhone. The smartwatch's Health app is also adding new features to record more exercise information, monitor safe hearing levels and track women's menstrual cycles.

In addition, the App Store will now be available on Apple Watch, making it possible for people to find and download apps directly to the device.

In its laptop and desktop businesses, Apple announced it is breaking up its long-time digital music software iTunes. Later this year, the software will be split into three apps: Apple Music, Apple Podcasts and Apple TV.

Apple has already reduced the importance of iTunes on the iPhone and iPad and will now do the same on Mac computers too. iTunes will still be available on Macs using older OS versions, as well as on machines running Microsoft's Windows system.

Apple also used its developer's conference to show off a new Mac Pro high-performance desktop computer to go on sale this fall. The machine, which Apple describes as "extreme in every way," is designed for professional users. Pricing for the low-end model Mac Pro starts at $5,999.

Bryan Lynn wrote this story for VOA Learning English, based on reports from the Associated Press, Reuters, Agence France-Presse and online sources. Hai Do was the editor.

Are you an Apple device user? If so, what are your thoughts on the company's upcoming offerings? Write to us in the Comments section, and visit 51VOA.COM.

screen – n. the part of a computer that shows images or writing

track – v. to record the progress or development of something over a period

laptop – n. a computer that is small enough to be carried around and used where a person is sitting