Update Required To play the media you will need to either update your browser to a recent version or update your Flash plugin.
By Marsha James
23 September, 2014


Irish band U2's recent online project with technology company Apple caused a storm of online controversy. The project gave free digital copies of U2's new album, "Songs of Innocence" to all Apple iTunes members, about 500 million people. An Apple "gift." But, a considerable number of members saw it more as a violation. Caty Weaver has more.

The band has a huge following. Millions of people love it. But, just as many people may not like the group or may not have even heard of it. This became apparent recently when U2 teamed with Apple. In doing so, U2's new album, "Songs of Innocence," was given to all 500 million iTunes subscribers. Sounds like a good idea, right?

Well, maybe not so. Much of the public reaction on social media criticized the album giveaway. Many iTunes users say they did not like that the music was ‘forced' on them. Some web posts called it an unwelcome surprise. Some tweets even mocked the band's philanthropic image.

Apple quickly answered the widespread protests. It provided users with a tool to help them easily remove the album from their iTunes library.

U2's album may have been free for listeners. And users did not have to pay to remove it. But, for Apple, the incident was far from free. Apple reportedly spent up to 100 million dollars for the marketing campaign. 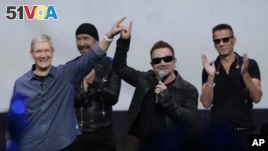 But despite the backlash, U2 and Apple are pleased that the music is out. U2 leader Bono spoke to an Irish radio station about the backlash. He called it "overblown." He said the project was a success except for a technological problem. He said the music was supposed to be available to all iTunes users but was downloaded to some devices by mistake.

*This report is written by Marsha James. Caty Weaver was the editor.

subscribe - v. to pay money to get a publication or service regularly

mock – v. to laugh or make fun of (someone or something)

backlash – n. a strong public reaction against something