Update Required To play the media you will need to either update your browser to a recent version or update your Flash plugin.
By Anne Ball
13 November, 2016


Each year, more ice disappears from the Arctic Ocean.

A new study blames human activity for the loss.

The damage is caused, the study says, by greenhouse gases coming from vehicles, airplanes and other human activities. These gases capture heat and warm the atmosphere, melting the ice.

The study was published in the journal Science.

Greenhouse gases are produced when fuel is burned to take a passenger on a flight from New York to Europe, or a person driving 4,000 kilometers in a gasoline-powered car. These activities emit enough heat-trapping gas to melt three square meters of ice on the Arctic Ocean, according to the study.

There is a "very clear linear relationship" between carbon dioxide emissions and sea ice retreat in September, according to Dirk Notz. He is a climate scientist at Max Planck Institute for Meteorology in Germany, and the study's lead author. He said this is especially the case at the southern boundaries of the Arctic Ocean. 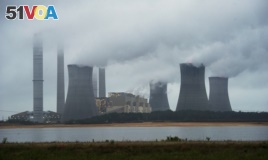 The coal-fired Plant Scherer is shown in operation on June 1, 2014, in Juliette, Ga. Emissions from coal-fired plants are part of the greenhouse gases that scientists say are causing global warming.

"It's very simple. Those emissions from our tailpipes and our coal-fired power plants are all going into the atmosphere," said Julienne Stroeve, a co-author of the study. She is a climate scientist at both the National Snow and Ice Data Center in Boulder, Colorado, and University College in London.

The study said limits on the increase in the world's temperature called for in the Paris Agreement on climate change are not enough for the Arctic summer sea ice to survive. The Paris Agreement calls for keeping the global rise in temperature to below two degrees Celcius. The study said at current carbon emission amounts, the ocean around the North Pole would likely be ice-free in September in about 30 years.

Closest planet may be able to hold life

Our next story comes from a star not too far from our own sun.

More details are coming out about the nearest exoplanet to our own solar system.

In August, a team of astronomers announced that they had discovered a small planet. They called the planet Proxima b. It orbits the star Proxima Centauri. It is the closest planet to our solar system, a little more than four light years away from our sun.

The scientists said the planet appears to be in the so-called Goldilocks zone—meaning the conditions there could support life.

Last Monday, a group searching for intelligent life beyond Earth called Breakthrough Listen, announced a new effort. Breakthrough Listen said it is using the Parkes Radio Telescope in Australia to listen for possible life on Proxima b. Because the telescope is in the southern hemisphere, it has a direct line to try to reach the planet.

"The chances of any particular planet hosting intelligent life-forms are probably minuscule," said Andrew Siemion, director of UC Berkeley SETI Research Center. "But once we knew there was a planet right next door, we had to ask the question, and it was a fitting first observation for Parkes. To find a civilization just 4.2 light years away would change everything."

As the closest known exoplanet, Proxima b is also the main target for Breakthrough Listen's partner program, Breakthrough Starshot. That program is developing technology to send small spacecraft to explore our nearest stars.

More details on Proxima b

A recent study published in The Astrophysical Journal Letters provided more details about Proxima b. It says that the conditions on the planet increase the chances that it can support life.

Researchers say Proxima b could be an ocean planet. It may be covered with the same kind of oceans below its surface that might exist on some of the moons orbiting the planets Jupiter and Saturn.

A team of researchers from the Marseille Astrophysics Laboratory said Proxima b could be an "ocean planet with an ocean covering its entire surface." The size and qualities of the planet "favor its habitability," they said.

The study also finds that the Proxima b, like Mercury in our solar system, has a metal core—the inside part of the planet. Researchers say its core accounts for two-thirds of its mass. They add that its mass is similar to Earth.

The U.S. space agency, NASA, says it looks forward to additional research to know about the radius of the planet. Without knowing the radius, it is "impossible to know what the planet looks like, or what it is made of."

The radius of a planet sometimes is measured during transit, when it passes in front of a star. But Proxima b is not known to transit.

Smita Nordwall, Rick Pantelo and others reported on this story for VOANews. Anne Ball adapted this story for Learning English. George Grow was the editor.

Goldilocks zone – n. a place in outer space that is not too hot, or too cold and could hold life

exoplanet – n. a planet outside our solar system

radius – n. a measure, taken from a straight line from the center of a circle or sphere to a point on the outer edge