Are Your Clothes Causing Pollution?

Update Required To play the media you will need to either update your browser to a recent version or update your Flash plugin.
By Anne Ball
16 April, 2017


Very small pieces of plastic, called microfibers, are polluting rivers and oceans. The source of these microfibers may surprise you: your clothes.

Clothes worn for outdoor activities and exercise are often made of synthetic material, like polyester or nylon. In cold weather, many people wear soft fleece clothing to keep warm.

They contain very small plastic fibers. They may also be harming the environment when you wash them. 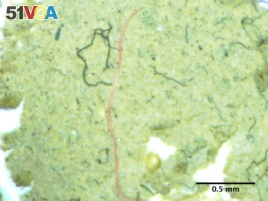 When people wash these clothes, very small pieces go down the drain with the wash water. These microfibers cannot be seen without a microscope.

Studies on microfibers in the environment

Pollution caused by plastic is not new, but recent studies have shown the effect of microfibers in the environment.

Studies show very small microfibers are ending up in our waters. A 2015 study found them in fish from California. They have even been found in table salt in China.

For three years, the Montana-based group Adventure Scientists has been researching microfibers and microplastics by collecting water samples from around the world.

Katie Holsinger is Adventure Scientists' microplastics manager. She says seventy-five percent of the water samples contained microplastics, but there has been a surprise:

"In our samples, ninety percent of the plastics we are finding are microfibers... Those are often times originating from textiles or other fibrous synthetic products."

The group has "adventure athletes" collect water samples while they are enjoying the outdoors, and most likely wearing this kind of clothing. So far, they have collected almost 2,300 one-liter bottles of water from oceans and fresh waters all over the planet, even remote places.

"What we know right now is that microplastic contamination is pervasive and it exists in places we would expect, which may be downstream from some wastewater treatment facilities, and in places that maybe at first we wouldn't expect—in some really remote areas of this world."

Patagonia is a company that makes fleece jackets and clothing popular with outdoor athletes. The data on microfibers led them to support research to find ways to stop the fabric from coming off in the wash.

The company provided support for research done by Patricia Holden and her students at the University of California, Santa Barbara.

The researchers worked to find out how much of the microfibers are released when washed. They tested fleece clothes, from both Patagonia and another company, by washing them in several kinds of washing machines. They caught the fibers with filters, and weighed them.

They found, on average, fleece clothes lost .3 percent of the cloth, or about one gram of fiber, with each washing. The study was published in Environmental Science and Technology last September.

Patricia Holden explains the weight of these microfibers can add up.

"So you think about the, you know, literally millions of garments like this that are being washed every day. And if a gram or more from each is being released into the wash water, that adds up. That can potentially add up to quite a bit."

Beyond the waterways, the researchers say microfibers may end up in soil and agricultural lands. They can also move around the atmosphere. This means there is much to be learned about microfibers and the environment, Holden says.

"Still very few studies and we need a good grip on the magnitude of this problem, where most of these fibers are ending up, and then that will tell us how to focus our future research and our future action and where it's needed to safeguard human health and the environment."

Some studies have shown that microfibers end up inside marine animals, like oysters.

So if these microfibers have been found in fish and seafood, are they safe to eat? Holden says the fibers tend not to move into the tissue of the fish. Researchers, including Holden, say that needs more study.

"It's not necessarily a new problem but it is being newly recognized as an issue that we need to better understand. Is it a real problem? Is it a real problem for human health, in terms of our diet, of fish or other types of food, we just don't know."

Katie Holsinger from Adventure Scientists says the microplastics are harming sea creatures. She says because other toxins can attach to microfibers and other plastics, it is something "we should all consider when we make food choices."

"Right now what science is coming out is tying microplastics ingested into fish and the way that those microplastics and the concentration of them in fish is affecting their mortality, their ability to reproduce, their nervous system function."

Steps to save keep microfibers from the environment

Until more information becomes known, there are steps to take to reduce the amount of microfibers in the environment.

Katie Holsinger says people should use less of the synthetic materials.

"But of course we rely, I including, heavily on my yoga pants that are stretchy and my polar fleeces to keep me warm outside. So if we already have those in our lives and we're using them, an important step would be washing them less."

New technology may also help. A bag is being designed in which to wash these clothes. It traps the microfibers in the bag and may soon to be available for purchase. Already on the market are filters for washing machines to keep microfibers from escaping with the wash water.

Anne Ball wrote this story for Learning English with material from VOA. Hai Do was the editor. We want to hear from you. Write to us in the Comments Section and visit us on 51VOA.COM.

synthetic - adj. made by combining different substances : not natural

textile - n. a fabric that is woven or knit

fibrous - adj. containing, made of, or resembling fibers

remote - adj. remote or far away

contamination - n. the act of making something dangerous, dirty, or impure by adding something harmful or undesirable to it

pervasive - adj. existing in every part of something : spreading to all parts of something

grip - v. to grab or hold something tightly

magnitude - n. the size, extent, or importance of something

mortality - n. the death of a person, animal, etc.

nervous system - n. the system of nerves in your body that sends messages for controlling movement and feeling between the brain and the other parts of the body