Update Required To play the media you will need to either update your browser to a recent version or update your Flash plugin.
By Gregory Stachel
04 August 2021


A robotic police dog is being used to look for high body temperatures in homeless people at a temporary shelter in Hawaii's capital, Honolulu.

The effort is one way public safety agencies are starting to use the commercial robot Spot. Spot can move like an animal and can walk over almost anything a person can.

A small group of police officials are experimenting with the four-legged machines. They say they are just another tool to keep emergency responders safe. But people concerned about privacy warn that police are quickly buying the robots without safeguards against misuse.

In Honolulu, the police department spent about $150,000 in federal pandemic aid money to buy their Spot. It was purchased from Boston Dynamics for use at a government homeless shelter near the airport. 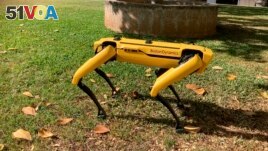 Jongwook Kim is the legal director at the American Civil Liberties Union of Hawaii. He said, "Because these people are houseless it's considered OK to do that." Kim added: "At some point it will come out again for some different use after the pandemic is over."

He said it has protected officers, shelter workers, and the homeless. The robot can do this by examining body temperatures between mealtimes. As a result, the homeless people could get tested for COVID-19 and quarantined if needed. The robot is also used to communicate with people who have the virus.

O'Neal said, "We have not had a single person out there that said, ‘That's scary...'" He said they do not test people without a reason.

Police use of robots is still rare and untested. It also has not always gone over well with the public. Honolulu officials faced criticism when a local news organization, Honolulu Civil Beat, found that Spot was paid for with federal COVID-19 aid money.

The New York Police Department started using Spot after painting it blue and renaming it "Digidog." However, Spot received attention and criticism that led the police department to return Digidog to its maker.

Boston Dynamics has said it is learning from the New York event on how to explain to the public what Spot can and cannot do. This has become increasingly important as Boston Dynamics becomes part of South Korean carmaker Hyundai Motor Company. In June, Hyundai reached an $880 million deal to take a controlling share in the robotics company.

Michael Perry is the vice president of Boston Dynamics. He said the company's usage guidelines bar the robot's use as a weapon. It is also not supposed to be used for anything that would violate privacy or civil rights laws.

Boston Dynamics depended on military research money for many years. But, it wants its robots to seem friendlier to local governments and businesses.

Another robot manufacturer, Philadelphia-based Ghost Robotics, approves of using its robots as weapons. It supplies its dog-like robots to several U.S. military services and their allies.

"It's just plug and play, anything you want," said Ghost Robotics CEO Jiren Parikh. He was critical of Boston Dynamics "selective morality" because of the company's past involvement with the military.

There are about 500 Spot robots in use. Perry said they are used by companies to inspect areas with dangerous levels of electricity. Spot is also used in building sites, mines and factories.

Spot is still mostly controlled by humans. All the operators have to do is tell Spot which direction to go in and it can deal with a difficult path, like steps. It can also operate on its own, but only if it has memorized a path and there are not any surprises.

Kim said that there might be some good uses for such machines. But opening the door for police robots to work with the public is probably not a good idea. He pointed to how Dallas police in 2016 put explosives on a wheeled robot and used it to kill a gunman. The incident started an ongoing debate about "killer robots" in policing and in war.

Kim said there is a possibility that these robots will "...increase the militarization of police departments and use it in ways that are unacceptable." He said, "Maybe it's not something we even want to let law enforcement have."

commercial –adj. concerned with earning money; related to the buying and selling of goods

responder – n. a person, such as a police officer, who is among those responsible for going to the scene of an accident or emergency to help

quarantine –v. to keep a person away from others to prevent the spread of disease

plug – v. to put (information, such as a word or number) in something

selective – adj. the chose one thing over the other; careful to choose only the best people or things