Are You a Snowbird or Snow Bunny?

Update Required To play the media you will need to either update your browser to a recent version or update your Flash plugin.
By Anna Matteo
06 February, 2016


Hello and welcome to Words and Their Stories from VOA Learning English!

Winters in parts of the United States can be cold and, at times, snowy. Sometimes violent storms with high winds combine with low temperatures to produce heavy snowfall. This creates blizzard conditions.

In 2016, a blizzard hit the Northeast U.S. It dropped record amounts of snow in many areas, including New York City and Washington, D.C.

A blizzard can be dangerous. But some people like them. Even people who do not like blizzards enjoy watching the falling snow. 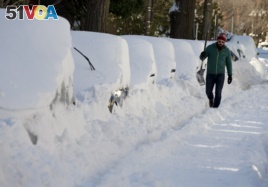 When a heavy snow blankets an area, it turns everything magical.

It turns a dirty city into a winter wonderland overnight. A blanket of snow softens a city's hard edges. It quiets loud noises.

There is little or no traffic and no car horns sounding.

Everything is white, quiet and peaceful.

Often snow leads to school cancellations. That is the best news to a child's ears. I remember when I was a young schoolgirl. I would wake up very early and listen to the news to find out if my school was among those canceled.

Boys and girls put on their warmest clothes, and go outdoors for winter fun. A popular winter activity for children is sled riding. You find the closest snow-covered hill, grab a sled and head out for a day of ups and downs.

Another favorite activity is building a snowman or snow woman, depending on what clothing you have available.

Building a snow cave is also fun. If you have many friends in your neighborhood, you can build a snow fort and have a big snowball fight.

This brings us to a useful winter expression. A snowball is something that a child makes to throw at a friend in a fight. But as a verb, snowball is very different. When a problem snowballs, it grows very big, very quickly.

Close your eyes and imagine a ball of snow that starts off rolling down a hill very slowly. But with every roll, it picks up more and more snow until it becomes a big snowball rolling very fast down the hill.

You could say, "What began as a small problem snowballed into a huge problem very quickly."

Here is the verb "snowball" used in a dialogue:

"He seemed to be doing well in school but his test grades in mathematics dropped quickly."

"I'll tell you what happened. He missed a week of school and had lots of catching up to do in math. Things just snowballed from there. He is really behind now."

Many people love a big snowstorm, such as snow bunnies.

Snow bunnies are not cute little animals that hop around on the ground.

A snow bunny is a young, attractive female skier.

But many people do not like the cold and snow.

In fact, some Americans dislike cold weather so much they go to a warmer climate to escape it. These people are called snowbirds.

Most snowbirds are older Americans who have retired. They just simply cannot deal with the cold or harsh winters any longer.

So now when you hear someone use the words snowbird and snow bunny you will know they are not talking about woodland creatures.

Join us again next week for another Words and Their Stories.

Spread your tiny wings and fly away
And take the snow back with you
Where it came from on that day
The one I love forever is untrue
And if I could you know that I would
Fly away with you ...

Anna Matteo wrote this story for VOA Learning English. George Grow was the editor. The song at the end of the story is "Snowbird" sung by Anne Murray.

blanket  - v. to cover with or as if with a blanket

sled - n. a small steerable one used especially by children for coasting down snow-covered hills : v. to ride on a sled or sleigh

Words in This Video

bundle up - v. to dress warmly

glistening - adj. to shine with light reflected off a wet surface