Are You Guilty of 'Sitting on the Fence?'

Update Required To play the media you will need to either update your browser to a recent version or update your Flash plugin.
By Anna Matteo
23 April 2022

This program takes a deeper look at words and expressions in the English language. Sometimes we take one word and see where it leads us.

Today, we look at the word "fence." 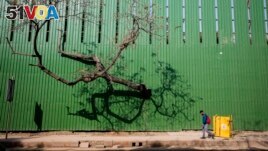 A man walks past a fence of a construction site along a street in New Delhi, India, March 9, 2022.

One definition of "fence" is an outdoor structure that encloses an area. Fences mark property. They are barriers. A fence is different from a wall because it does not have a solid foundation along its whole length.

But let's get back to "fence" meaning an outdoor structure.

As we said, a fence marks a property line. It gives you privacy. People can't see onto your property and vice versa. To many people, this is a good way to keep peace in a neighborhood. Everybody just minds their own business. Sometimes if a neighbor knows too much of your business, it could lead to problems.

That is where this proverb comes from: "Fences make good neighbors." This proverb appears several times in Robert Frost's poem Mending Wall published in 1914.

Our next expression is very common: To be on the fence.

For example, let's say your child's school just raised $20,000. School officials want to spend that money on either new science equipment or a new outdoor play area. They ask the parents to give their opinion. But you don't know which is more important for the students. So, you sit on the fence for awhile. You don't feel strongly about either choice. If you did, you would certainly pick a side and not stay on the fence.

Sometimes we turn this saying into a noun.

A "fence-sitter" is someone who always stays neutral. They never take sides in an argument. They do not seem to have an opinion of their own. And they never take a stance for anything. This could show a lack of courage. So, calling someone a fence-sitter is usually an insult.

Now, that is not the case if you are simply undecided about an issue; or if you need more time to make a decision; or if you just don't care.

For example, let's say there is an election coming, and I have not decided who I am voting for. I can say, "I don't know. I'm on the fence between two candidates." This doesn't mean I'm unwilling or unable to pick a candidate. I just haven't yet.

However, let's say I never vote because I can't make a decision. And I have a long history of being indecisive. Someone could rightfully call me a fence-sitter. And that would rightfully be an insult.

criminal – n. a person who has committed an unlawful act

privacy – n. the state of being out of the sight and hearing of other people

vice versa – adv. with the order turned around

neutral – adj. not favoring either side in a quarrel, contest, or war

courage – n. the ability to meet danger and difficulties with firmness