Are You Stuck 'Between a Rock and a Hard Place?'

Update Required To play the media you will need to either update your browser to a recent version or update your Flash plugin.
By Anna Matteo
25 May, 2019

On this program we explore the origins and usage of common expressions in American English.

And we are happy that you have decided to learn English. It is a good choice. There is really no downside in learning a new language, especially a useful one. But not all choices are as harmless. Some decisions have no good choice. 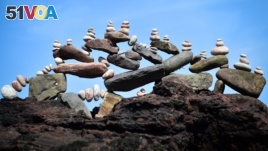 A picture shows a balanced sculpture built during the European Stone Stacking Championships 2019 in Dunbar, Scotland, on April 21, 2019. (Photo by Andy Buchanan / AFP)

Today we will talk about those.

English has many words and expressions that describe those times when you must make a choice but all of your options are terrible!

For starters, you can say you are between a rock and a hard place. This is when you must decide between two things that are equally unpleasant.

Many cultures have their own version of this story. But one of the most famous is the Greek story of Scylla and Charybdis.

(The Police sing the song "Wrapped Around Your Finger.")

The online resource Encyclopedia Britannica explains that in Greek mythology, Scylla and Charybdis were two immortal monsters. They terrorized ships that tried to travel the Strait of Messina, a narrow waterway between Sicily and the Italian mainland.

Scylla is the personification -- the human representation of a non-human thing -- of sharp rocks and other objects along the coast. Scylla destroyed ships that came too close.

Charybdis is the personification of a whirlpool, a dangerous water formation in seas and oceans. Charybdis also destroyed ships that came too close but in a very different way.

But both could kill you! And they were located so close to each other that they gave sailors an almost impossible choice. Avoiding Charybdis meant passing too close to Scylla and vice versa.

And that is what "being between a rock and hard place" means. You are in an impossibly difficult situation with no good choices.

So really, you must choose between the lesser of two evils.

Now, let's hear this used in a conversation between two friends. A woman is planning a birthday party for her son. And a friend who offers to help finds himself in a dilemma, a real pickle – you know a difficult situation! He has a hard decision to make.

Can I help with the birthday party?

Oh yes! Thank you so much!

Of course! It's your son's birthday. I'm happy to help.

Well, I need to take my dog to the vet later today. But I also promised my son that I would take him and his friends out for ice cream after the party. So, can you either take the dog or the kids?

Seven. No wait. Eight. And they will probably all be ready for a nap.

So they'll be tired and quiet?

No. They will be irritable and over-excited because they've had too much sugar.

Argh. That sounds terrible. But then again, I'm not really a dog person. Is she good in the car?

She hates it! But not as much as she hates the doctor. She will probably bark the whole time.

Okay. So, I can either take an unhappy, barking dog to the vet. Or I can take a car full of overly excited six-year-olds out for messy ice cream.

Right. But I'll pay for the ice cream and I'll pay to have your car cleaned afterward – no matter which one you choose.

I don't know! I have a dilemma. I'm still weighing my options. They are both so bad!

I didn't mean to put you between a rock and hard place. But you did offer.

This may sound the same as "being between a rock and a hard place" but we use it a little differently.

Now whenever you have to choose between these expressions, you will know which one to use. And luckily choosing between them will not put you between a rock and a hard place.

Is there a time when you found yourself between a rock and a hard place? Let us know in the comments section using the words and expressions you heard here.

Anna Matteo wrote this script. Ashley Thompson edited it. At the end of the program. The song at the end is Daniel Ramirez singing "Rock and a Hard Place."

option – n. the opportunity or ability to choose something or to choose between two or more things

personification – n. representation of a thing or abstraction as a person or by the human form

whirlpool – n. a rapid swirl of water with a low place in the center into which floating objects are drawn

vet – n. short for veterinarian, a doctor that treats animals