Update Required To play the media you will need to either update your browser to a recent version or update your Flash plugin.
By Ashley Thompson
12 January 2022


Argentina is experiencing extremely hot weather. Temperatures in some parts of the South American nation have neared 45 degrees Celsius, making it the hottest place on the planet for a short period.

The heat wave has put pressure on power systems and forced Argentines to seek cooler air in the shade. Hundreds of thousands of people in the capital Buenos Aires were without electricity after power systems failed.

"I came home and we were without electricity and the house was a furnace," said 42-year-old Jose Casabal. He took his children out of the house to find somewhere to cool down. "I took them off to their grandmother's house to swim in the pool," he said. 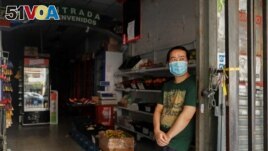 A seller waits for costumers at his shop during a blackout, amid a heat wave, in Buenos Aires, Argentina January 11, 2022. (REUTERS/Agustin Marcarian)

The heat wave made Argentina the hottest place on earth for several hours, taking over from parts of Australia that cooled during the night.

"Even early morning it was very hot, around 31 degrees," said Gustavo Barrios, who is 34. "I do not have air conditioning at home and we were with just the fan blowing hot air. It's unbearable."

Local leaders warned residents to stay out of the sun in the hottest part of the day, wear light clothing and drink plenty of water.

"We have to be very careful these days," said Buenos Aires city mayor Horacio Rodriguez Larreta.

Weather expert Lucas Berengua said the heat wave could set records in the country. "This is a heat wave of extraordinary characteristics," he said.

For some, the heat wave raised questions about climate change as well as more extreme weather to come.

Marta Lorusso, 59, said she has lived in Argentina her whole life. She said she remembers when the climate in her country was temperate – not too hot and not too cold. Today, things are different.

"I drink liters of water and do what I can," she said. "And on top of it all, without electricity. I don't know what to do."

fan - n. a machine or device that is used to move the air and make people or things cooler

unbearable - adj. too bad, harsh, or extreme to be accepted

characteristic - n. typical of a person, thing, or group