Update Required To play the media you will need to either update your browser to a recent version or update your Flash plugin.
By Dan Friedell
30 May, 2017

American singer Ariana Grande will return to Manchester, England, on June 4 to play a concert.

She is raising money for the people killed and injured in the Manchester explosion on May 22. Grande had just finished her performance when a bomb went off at the Manchester Arena. 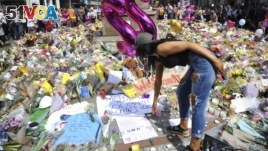 A young woman views of flower tributes for the victims of Monday's explosion at St Ann's square in central Manchester, England, May 25 2017.

At least 22 people were killed and more than 100 others were injured. The Manchester Evening News reports that 50 people are still in the hospital.

British police identified the Manchester attacker as 22-year-old Salman Abedi. Abedi was a British citizen whose parents came from Libya. The Islamic State group claimed responsibility for the attack, but British and U.S. officials could not confirm the claim.

Grande's concert on Sunday is called "One Love Manchester." It will take place at the Old Trafford cricket ground, which can hold about 50,000 people.

Tickets go on sale on Thursday. The ticketing website says that people who were at Grande's May 22 concert can attend this weekend's concert for free.

Money raised from ticket sales will go to a fund set up by the city of Manchester and the British Red Cross.

Grande said in a statement "we will not quit or operate in fear." She said she wants people to be more helpful and loving and live more "kindly and generously than we did before."

Dan Friedell wrote this story for VOA Learning English based on a story by The Associated Press. Ashley Thompson was the editor.

Will you watch the concert in Manchester? We want to know. Write to us in the Comments Section or on 51VOA.COM.

ground – n. the land on which a game is played (mostly British)

fund – n. an amount of money that is used for a special purpose

generously – adv. providing more than the amount that is needed or normal : abundant or ample