Update Required To play the media you will need to either update your browser to a recent version or update your Flash plugin.
By Dan Friedell
05 June, 2017

Many of the top videos on YouTube Monday came from Ariana Grande's "One Love Manchester" concert.

Grande had just finished performing at the Manchester Arena on May 22 when a bomber caused an explosion. The attack killed at least 22 people and injured over 100 others. 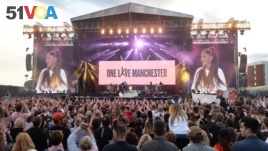 Ariana Grande performs during the One Love Manchester benefit concert for the victims of the Manchester Arena terror attack at Emirates Old Trafford, Greater Manchester, in Britain, June 4, 2017.

Grande returned to Manchester on Sunday for a benefit concert at the Old Trafford cricket ground. She and many other singers performed at the show to raise money for victims of the attack.

Grande was the host of the show and joined in on songs with other artists, such as Miley Cyrus and The Black Eyed Peas. She and The Back Eyed Peas performed the group's hit song "Where is the Love?" Grande sang the parts normally sung by Fergie, who did not perform Sunday night.

Grande and Cyrus performed "Don't Dream it's Over," a song by Australian band Crowded House that became popular almost 30 years ago.

About 60,000 people attended the benefit concert, including many who saw Grande's show at the Manchester Arena in May. The event raised almost $3 million for the city of Manchester and the British Red Cross.

Many people said they liked the show. One critic from The Telegraph newspaper complimented Grande's performance. Neil McCormick said she has the ability to give up the fancy costumes and cat ears she is known for and let her voice speak for itself.

But perhaps the image that got the most attention on social media was that of a police officer dancing in a circle with some young concert attendees.

What was your favorite part of the concert? We want to know. Write to us in the Comments Section or on 51VOA.COM.

benefit – n. a social event to raise money for a person or cause

host – n. a presenter; someone who presents other people or acts to the public
compliment – v. to say nice things about someone or something

fancy – adj. not plain or simple

costume – n. the clothing worn by someone who is trying to look like a different person or thing