Arizona: The Spirit of Route 66


Arizona's stretch of Route 66 contains some of America's most impressive - and famous - landscapes.

The road leading up to the Grand Canyon National Park is just off Route 66. You travel through the Kalibab National Forest, where the air smells of fresh pine. Deer and elk sightings along the way are common. 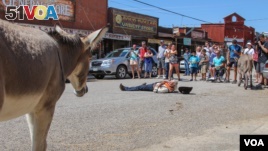 Arizona's nickname may be the Grand Canyon State. But with so many ghost stories along Route 66, it could also be called the Haunted State.

One of those ghost stories takes place at the historic Weatherford Hotel in Flagstaff, Arizona.

The Weatherford Hotel has been around since 1897. A Texan named John Weatherford built the hotel after falling in love with the town and surrounding mountains. It was a grand hotel. The city's local newspaper at the time declared, "There is no finer hotel in the whole southwest."

An elegant balcony wraps around the hotel's second floor, offering views of the city and nearby San Francisco peaks.

Many famous Americans have stayed at the Weatherford, including former President Theodore Roosevelt and newspaper publisher William Randolph Hearst.

And, as the story goes, some visitors never left.

Weatherford legend includes the ghost of a broken-hearted bride. She is reportedly seen most often in the hotel's ballroom on the second floor. Over the years, many guests and hotel workers have claimed to hear or see her -- and other ghosts -- in the night.

Manny Martinez is the manager at the Weatherford. He says he has heard all about ghostly sightings from his guests and employees.

"There's been all kinds of different stories about it. Mainly weird things with the lights, with the noises. You know, it's an old building, as well. But there are some stories that I kinda' do believe. You do get an eerie feeling, especially working upstairs at that bar. You know, it's two in the morning, you're by yourself closing it down, so you kind of get the feeling like somebody's watching you."

The broken-hearted bride reportedly stayed in hotel room 54. These days, the room is used as a closet. Martinez explains that several workers have reported mysterious events.

"This is Room 54. We turned it into a maid's closet now. As you can tell, the door kinda' sounds a little creepy as it opens up. An employee of mine came up here once, he came up here, opened the door, and he saw a picture of something, a silhouette of somebody -- turned on the light, turned back around to where he was looking, there was nothing there.

"But this is where my maids, as well, said that they found a lot of weird things, you know, sheets kinda looking like they were burned. The room itself is kinda scary, kinda creepy..."

Another of Flagstaff's spooky stories took place at an old honky-tonk called the Museum Club. Its former owners are said to haunt the place to this day. Their lives ended tragically inside the club.

In 1973, Don Scott and his wife Thora owned the business. They lived on the second floor. One late night, Thora Scott fell down the stairs and broke her neck. She died a few weeks later. Her husband never recovered, and his business suffered as well. Don Scott shot and killed himself at the club two years later.

Rhylee Helsper works at the Museum Club. She says there are reports of sightings of Don and Thora's ghosts.

"She (Thora) is often seen at the back bar," Helsper said. "They (the ghosts) both hang out. Don's not exactly a friendly character. But, Thora's a sweetheart."

West of Flagstaff, Route 66 leaves behind the pine trees and cool air for much warmer climates. It winds through Crozier Canyon, with its beautiful reddish-brown hills piled with boulders. Some rocks seem in position to roll down the hills at the lightest gust of wind.

The town of Seligman marks the beginning of the longest remaining uninterrupted stretch of Route 66. The road extends unbroken for over 250 kilometers, until the Colorado River divides Arizona and California.

Along the way is the desert city of Kingman. In the 1940s, the town became a popular spot to film Old West gunfighter movies. As a result, many movie stars spent time in the area, including Marilyn Monroe and Clark Gable.

From Kingman, Route 66 runs through narrow roads in the mountainous desert until it reaches the Old West outpost of Oatman.

Oatman, Arizona was once a ghost town – a town abandoned by its residents, often because economic activity that supported it has failed or ended.

But tourism has revived Oatman's economy.

Arriving in Oatman is like returning to the American West of 150 years ago. The storefronts and other businesses look just as they did decades ago. Wild burros roam the streets among the tourists. These days, burros far outnumber Oatman residents.

Tourists here come to see the donkeys -- and the Old West outlaws. Actors put on a fake gunfight show two times every day. The show takes place in front of the Oatman Hotel.The actors who play the gunfighters live in Oatman.

"My name's Yosemite. They call me John George when I'm in trouble. But, Yosemite."

"They call me Dusty."

"What about when you're in trouble, Dusty, what do they call you?"

People line both sides of the street to watch them perform. They "rob" the Oatman Hotel and then argue about who should hold on to the big bag of money.

They decide to settle the dispute the old-fashioned way, with their guns. Of course, they shoot blanks, not bullets.

"We do gunfights two times a day, 12 o'clock, high noon, and 2:15, if there's any targets left. So, if you show up bring a carload of 'em and (we'll) more than likely give you a free ticket. That's the driver (who) gets out free."

The show is free and the two men are volunteers. But they do pass their hats asking for donations. All the money the crowd donates goes to a medical center that treats child burn victims.

Oatman is just a few kilometers from Arizona's border with California, the final state on the Mother Road journey.

Leaving behind the beauty of Arizona is not easy. But, its spirit – and spirits – will stay with visitors long after they leave.

And I'm Ashley Thompson. Join us next week as we cross the state of California and reach the Pacific Ocean.

landscape - n. an area of land that has a particular quality or appearance

ghost - n. the soul of a dead person thought of as living in an unseen world or as appearing to living people

balcony - n. a raised platform that is connected to the side of a building and surrounded by a low wall or railing

peak - n. the pointed top of a mountain

pine - n. a tree that has long, thin needles instead of leaves and that stays green throughout the year

outpost- n. a small town in a place that is far away from other towns or cit

ghost town - n. a town that no longer has any people living in it : an abandoned town