Update Required To play the media you will need to either update your browser to a recent version or update your Flash plugin.
By John Russell
19 August, 2019


Yan Wenliu stops to talk as he prepares to leave his sugarcane field in Southwest China. He is concerned about the powerful new pest that has attacked his crops this year.

"I don't know what it is," says Yan, a 36-year-old farmer from Yunnan province. "But it is bigger than other ones. I have never seen this worm before."

Known locally as the "heart-devouring worm," the pest has spread more than 3,000 kilometers north since arriving from Myanmar seven months ago. It has reached a total of 21 provinces and regions in China, and now threatens its grain production.

In Yunnan alone, where the pest struck first in China, it had affected some 86,000 hectares of farmland by the middle of June. The fall armyworm has damaged crops such as corn, sugarcane, sorghum and ginger. 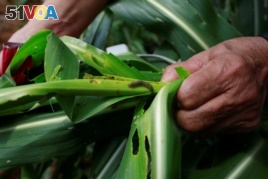 First found in the Americas, the armyworm has spread through Africa and Asia since 2016. As a moth, the insect can fly up to 100 kilometers a night.

This creates a big problem in China, where about 90% of crop production comes from small farms of less than a hectare. Many owners lack basic knowledge and resources to fight the pest.

The Chinese government warned earlier this year that the armyworm was a severe threat to the country's food security. In May, it launched a campaign to "snatch grain from the insect's mouth."

The government has given millions of yuan to affected areas and sent experts to educate farmers.

To those in Yunnan, the solution to the worm problem seemed clear: pesticide products. "You have to keep spraying chemicals. If you don't kill the worm, you will end up penniless," says farmer Yan Wenliu.

But many farmers cannot pay for the chemical pesticides in the amounts required.

In addition, many farmers do not know they must use different pesticides at different crop growth stages. They must also rotate pesticides to prevent resistance to them. All of this means that the money is often wasted.

Yu Xianger, a farmer in Nuodong, put pesticides on her small corn field without results. She is thinking about finding work in the city.

"The worms have devastated my corn crops this year. And there's nothing much else I can do," she said.

Experts say the fight against armyworms is difficult. Skilled at hiding, the pest is hard to find and likes to come out at night, when it eats plants and flies to nearby fields.

Yao works as a sales manager for pesticide supplier Jingbo Agrochemicals Technology Company Limited in Yunnan Province. Yao told the Reuters news agency: "Local farmers here didn't use much pesticide before and wouldn't buy chemicals until they saw the worms, meaning they might have missed the best time to kill them."

While the pests are a problem in China's south, the chances of a good harvest in the north are "much better," says Hu Gao, a professor at Nanjing Agricultural University.

Prevention measures have given the north, which produces more than 70% of China's corn, more time to prepare for an invasion.

The worm has yet to reach the northeastern provinces, including Heilongjiang, the top grower of the grain.

Some experts believe the northeast's usually lower temperatures will protect it from a full attack.

Back in Yunnan, however, farmer Yan Hannei is thinking about growing other plants like vegetables.

"I am going to lose so much money this year," he says. "What can you do? I can only stop growing corn and grow something else."

Hallie Gu and Ryan Woo reported on this story for Reuters. John Russell adapted it for Learning English. George Grow was the editor.

pest – n. an insect, animal or other organism that attacks crops

devour - v. to quickly eat all of (something) especially in a way that shows that you are very hungry

resource – n. a supply of money, materials and other objects that can be used to make something operate more effectively

snatch - v. to take (something) quickly or eagerly

stage – n. a period or step in a process or period of development

rotate - v. to regularly change the place or position of things or people so that each takes the place of another

manager – n. a person responsible for controlling or supervising a business or other organization