Update Required To play the media you will need to either update your browser to a recent version or update your Flash plugin.
By Susan Shand
08 September 2021


For almost six years, Andrea Haberman's burned wallet lay mostly untouched at her parents' home in the American state of Wisconsin. It was placed alongside some of her other personal belongings – her burned cellphone, eyeglasses and house keys.

Those few objects were all that remained of a young life that ended when a hijacked airplane struck the North Tower of the World Trade Center on September 11, 2001. Haberman was 25 years old and about to be married. She was on a business trip from Chicago. It was her first visit to New York City.

For Haberman's family, the belongings she had with her that day are a reminder of their great sadness. 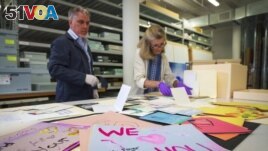 Jan Ramirez, chief curator at the 9/11 Memorial & Museum, right, sifts through a collection of condolence cards for a victim of 9/11 that were donated to the museum's archive, July 16, 2021, in Jersey City, New Jersey. (AP Photo/Robert Bumsted)

"These are not the happy things you want to remember someone by," said her father, Gordon Haberman.

To ease their pain, the family gave the items to the 9/11 Memorial & Museum. The thousands of personal artifacts tell the story of the lives lost on that day.

"Each person who makes up part of that tally was an individual who lived a life," said Jan Ramirez. She is the museum's chief curator and director of collections.

Many of those personal items were found in the ruins of what was once the Twin Towers at the World Trade Center. Other items were donated by survivors or by the families of those who died.

A collection of woodworking tools represents Sean Rooney, a vice president at Aon Corp. He died in the South Tower. Woodworking was his hobby.

Rooney called his wife, Beverly Eckert, at their home in Stamford, Connecticut, after being trapped by fire and smoke on the 105th floor. He spent his last minutes alive talking about their life together. He said "I love you" to his wife as he fought to breathe.

His body was never found.

Beverly died eight years later in a plane crash while traveling to Buffalo, New York, to award a scholarship in the name of her husband. Before she died, she had set aside the woodworking tools.

Robert Chin's hobby was softball, a sport he loved. He played for his employer Fiduciary Trust International. After his first hit, his coworkers all signed the ball and gave it to him. Many of those coworkers also died on 9/11. Chin's family gave the ball to the museum.

Not all artifacts included in the collection represent someone who died. Some are from those who survived the terrorist attacks.

Linda Raisch-Lopez gave the museum the blood-covered shoes she was wearing that day. She walked down from the 97th floor without shoes to move more quickly, cutting her feet. She later put the shoes back on to run away from the area.

Only a small part of the museum's collection of artifacts can be shown at one time; there are simply too many objects. When they are not on display, the artifacts are stored in buildings in New York and New Jersey.

Ramirez called the artifacts "palpable pieces of truth." She added that the collection brings purpose to what she does and will continue to do.

hijack – v. to take control of (an aircraft) by force

artifact – n. : a simple object that was made or used by people in the past

curator – n. a person who is in charge of the things in a museum

hobby – n. :an activity that a person does for pleasure when not working