Update Required To play the media you will need to either update your browser to a recent version or update your Flash plugin.
By Bryan Lynn
14 September 2022


American researchers have created a technology tool that aims to identify and re-create different smells.

The system is powered by artificial intelligence (AI). The tool was developed and tested by researchers at Google, universities and the Monell Chemical Senses Center. The team recently released results of their method and described the process in an article in the publication Proceedings of the National Academy of Sciences.

The researchers said smells, also called odors, are produced by molecules released into the air. Those molecules then enter our noses and are processed there by "sensory receptors." Those receptors send signals to the brain to help us recognize smells. 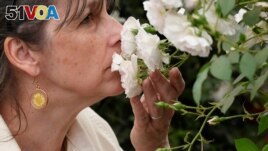 A visitor smells a rose as she attends the Chelsea Flower Show in London, Britain, May 26, 2022. (REUTERS/Toby Melville)

The team said smells are identified in a way similar to how we identify and measure colors – using sensory maps. For example, maps – like the traditional color wheel – can show many different colors. Such maps present color combinations and show how the colors blend with each other.

But the researchers said that historically, "useful maps for smell have been missing." This is because the molecules related to smell are much more complex. They depend on more than photon particles used to see colors.

In addition, the researchers said that while the human eye has just three sensory receptors for color, the human nose has more than 300 for smell.

The scientists built on past research to produce a neural network model that aims to create a "map" to identify molecules related to smells. A neural network is a computer processing system built to act like the human brain.

The team from Google AI calls the newly developed tool a "principal odor map." The main purpose of the map is to "predict the odor properties of molecules," the researchers said.

The neural network models were also trained to identify which molecular characteristics were needed to make correct smell predictions. The researchers reported that the AI-powered map permits them to "predict and discover new odors and the molecules that produce them."

The team said their research suggests there are probably billions of molecules that are likely odorous, but have not yet been smelled. Since the mapping tool was shown to recognize an odorous molecule from its structure, "this guides us to discover new classes of odorants..." the researchers said.

For the experiments, the researchers said they collected the largest ever set of data on odor descriptions for different molecules.

For comparison purposes, they used human subjects to identify the smells of 400 molecules using 55 different descriptions. The team said that when compared to the human odor identifications, the neural network model repeatedly performed better than the human subjects.

The team said such a tool can be used across many different fields, including the health care, food and fragrance industries.

The researchers reported that the tool can be used to help fight one of the world's biggest health problems – diseases spread through insects. They said the system can measure how effective a molecule is at keeping mosquitos away from humans.

The team said it discovered a series of new molecules that can repel mosquitos with at least the same effectiveness as DEET, a chemical commonly used in insect repellants.

This discovery, the researchers said, can lead to the development of less costly, longer lasting, and safer repellants than those containing DEET. Such repellants could be used "to reduce the worldwide incidence of diseases like malaria, potentially saving countless lives," the team added.

Bryan Lynn wrote this story for VOA Learning English, based on reports from Google AI and PNAS.

blend – v. to mix two or more things together

repel – v. to force away something unwanted

incidence –n. the number of times something happens