Update Required To play the media you will need to either update your browser to a recent version or update your Flash plugin.
By Jill Robbins
10 February 2022


Imagine a town clock that shows not the minutes and seconds that control our lives, but time that moves faster or slower based on how fast rivers are running.

The Chattahoochee River and some smaller bodies of water flow through the city of Atlanta, Georgia. Most of the people in the city do not think much about the river. Jonathon Keats wants to change that. The San Francisco-based artist is on an extended stay in Georgia. He has been working there to help people become more involved with their natural environment.

Keats is called a "conceptual artist," that is, he works with ideas rather than creating physical works of art. His latest concept, "Atlanta River Time," would have volunteers go down to waterways and take measurements. The information they collect, with help from conservation groups and U.S. Geological Survey data, would tell time in a very different way. The natural flow of Georgia's waterways would be shown on a large city clock in downtown Atlanta. 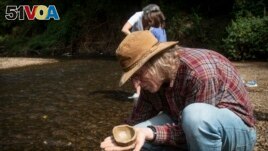 People will "get into the water"

"Ideally, people will get into the water ... to observe and to consider the effects of the flow of water on the world as well as the causes of that flow," Keats told The Associated Press. He wants people to think not only about time, but about "how we live in the world."

Keats has led classes since the fall of 2021 to teach people how to use hand-made materials to record flow rates. To bring his idea into reality he hopes to build a mechanical clock that uses a pendulum. A pendulum is a stick with a weight on one end that moves back and forth regularly to keep time. Every year, people would travel to the source of the Chattahoochee river and measure the water flow. They would change the movement of the pendulum based on the water's movement.

Why use waterways, when we have clocks, smart phones, computers and watches telling us the time already?

Keats says he does not use a mobile phone, but he has thought a lot about such questions while walking along Georgia's red-clay riverbanks.

"All of this is a story that we can tell, and a story ... allows us to reflect on ourselves as a result of that — of that path that we take," Keats said.

Art based on ideas

The artist's earlier art projects included selling imaginary "lands," and opening a restaurant that serves special sunlight to plants. He put a "millennium camera" in a tall building at Amherst College that he said would record climate change through a 1,000-year photograph of a mountain range. Keats has placed similar cameras at Lake Tahoe and Arizona State University.

Keats was invited to be the Artist in Residence at Serenbe, a planned community just outside Atlanta. Along with teaching classes, he can enjoy the natural surroundings nearby. His participants recently made bowls of clay and made record books using colored paper. Then they all traveled to South Fork Peachtree Creek. There, they watched leaves float along with the water. They timed the movement of the leaves by letting water run out through holes in their bowls.

It is a simple way to measure flow rates, but Keats hopes it will help people look differently at how humans interact with nature.

"I believe that the rivers and streams and creeks in and around Atlanta are a natural resource that helps us to see ourselves in relation to the natural world more broadly," he said.

Ron Harris reported on this story for the Associated Press. Jill Robbins adapted it for Learning English.

reflect – v. to think of someone or something in a specified way — + on or upon

Artist in Residence – phrase. Artist-in-residence programs give artists the opportunity to live and work outside of their usual environments, providing them with time to reflect, research, or produce work.

interact – v. to act together : to come together and have an effect on each other — often + with

How would you measure time using the natural world where you live? We want to hear from you. Write to us in the Comments Section.