Update Required To play the media you will need to either update your browser to a recent version or update your Flash plugin.
By John Russell
13 March, 2019

Many people know of Pablo Picasso, the Spanish artist who created some of the 20th century's most famous paintings. But few, until recently, have heard of "Pigcasso."

Pigcasso is the name given to an artistic pig that was rescued from a slaughterhouse in 2016. The pig currently lives – and creates art – at an animal sanctuary in South Africa's Western Cape region.

Joanne Lefson runs the sanctuary. She says pigs are very smart animals that like to keep their minds active. "When I brought Pigcasso here to the barn, I thought 'how do I keep her entertained?'" she said. 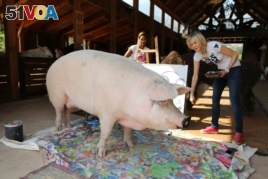 Pigcasso, a rescued pig, stands in front of the canvas she painted at the Farm Sanctuary in Franschhoek, outside Cape Town, South Africa February 21, 2019.

Lefson gave Pigcasso some balls, paintbrushes and other objects to play with. "She basically ate or destroyed everything except these paintbrushes... she loved them so much," Lefson said.

Soon the pig was using those paintbrushes to create art.

Her paintings can sell for almost $4,000. The money from her sales go to animal welfare.

Pigcasso has even had one of her artworks turned into a watch face by Swatch, a Swiss watchmaking company. The limited edition "Flying Pig by Ms. Pigcasso" has green, blue and pink colors and sells for $120.

"FLYING PIG BY MS. PIGCASSO has us squealing with joy!" notes a statement on the company's Twitter page.

Lefson says Pigcasso is "definitely an abstract expressionist." The term refers to the artistic movement that sought to communicate emotions using abstract images.

"You can't exactly define what she's painting," Lefson added, "but I can tell you that her style slightly changes depending on her mood like any great artist."

Alexandra Hudson reported on this story for Reuters. John Russell adapted it for VOA Learning English. Kelly Jean Kelly was the editor.

slaughterhouse – n. a building where animals are killed for their meat

paintbrush – n. a brush used for putting paint on a surface