Update Required To play the media you will need to either update your browser to a recent version or update your Flash plugin.
By Ashley Thompson
12 March 2020


The spread of the new coronavirus is affecting the work and pay of people around the world.

A delivery driver in Britain worries about getting sick from the people who sign for their purchases each day. 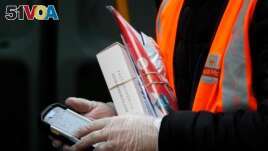 In this March 5, 2020, photo, a Royal Mail employee wears gloves as he hold parcels and the signature handheld as he delivers in London.

And a server at a restaurant in the American state of Missouri washes his hands more often and simply hopes for the best.

Some professionals can work from home or call in sick if they experience signs of COVID-19, the disease the virus causes. But that is not possible for service workers who often come into contact with the public. Their situation is made worse by limited or non-existent sick leave and health insurance.

"The recommendations on what people should be doing to protect themselves really gives a sharp indication of the divide between white collar and blue collar workers," said Shannon Liss-Reardon, a workers rights lawyer in Boston, Massachusetts.

In the United States, about 27 percent of non-government workers do not get paid sick leave, the Bureau of Labor Statistics says. There is no federal sick leave policy in the United States, but 12 of the 50 states as well as Washington D.C. require employers to offer paid sick leave. And, employers with 50 or more employees are required to offer health insurance. That protection is not extended to part-time or independent workers.

On Monday, President Donald Trump said he was seeking help for hourly-wage workers to make sure they will not miss a paycheck.

‘What we face daily'

In Britain, delivery driver Ed Cross worries about catching the virus from the machine he gives to people to sign for their goods.

"People have coughed on their hand and then got hold of my machine," said Cross, who is 53 years old. That is what "we face daily," he said.

The British government last week made it easier to collect sick pay. It also is working on changes to help millions of non-permanent workers like Cross who do not meet conditions for receiving sick pay. And, the company he works for has announced a financial deal to help workers if they need to restrict themselves to home.

The new virus spread has shown huge holes in health care coverage at a time when people may need it most. Most European countries and Canada have universal healthcare systems. But the United States has a mix of public and private insurance.

Joey Ingham works at a restaurant in Kansas City, Missouri. He does not have health insurance. The restaurant is popular with business travelers, he says.

"If I wasn't able to come into work, it would be hard to make ends meet," said Ingham. If he felt sick, he said, he would probably talk to a supervisor about what to do.

In France, people have the right not to work and get full pay when they consider their workplaces to be dangerous. Some service workers there have stayed home for a short period because of infection concerns. Workers at the Louvre Museum in Paris refused to work for two days. They returned to work only after officials there announced new virus-fighting measures.

delivery - n. the act of taking something to a person or place

insurance - n. an agreement in which a person makes payments to a company and the company promises to pay money if the person is sick, injured or dies

cough - v. to force air through your throat with a short, loud noise often because you are sick

indication - n. something (such as a sign or signal) that points out or shows something

make ends meet - expression. to earn enough money to live without getting into debt

scared - adj. afraid of something