Update Required To play the media you will need to either update your browser to a recent version or update your Flash plugin.
By Mario Ritter Jr.
01 December, 2018


The ruling party in Singapore has named a likely replacement to Prime Minister Lee Hsien Loong. Lee is 66 years old and has said he will step down at age 70. He is the son of Singapore's founder, Lee Kuan Yew.

Late last week, Singapore's 57-year-old finance minister, Heng Swee Keat, was given an important position in the party's leading decision-making group. That group of 16 ministers, known as the fourth generation, or 4G, declared Heng "first among equals." His new position is expected to lead to the prime ministership.

Lee Hsien Loong has been Singapore's prime minister since 2004. He is widely expected to step down after elections in early 2021. Lee also heads the People's Action Party, or PAP, which has ruled since Singapore separated from Malaysia in 1965. The island, which today is home to about 5.6 million people, has been a model of stable economic growth since that time.

Preparing the way for new leadership

Party leaders want to protect that stability and the PAP's control. In May, they watched as Malaysia's longtime ruling party suffered defeat in elections.

Lee said after the Malaysian vote, "The ruling party, the PAP, does not have a monopoly of power."

Lee is Singapore's third prime minister after Lee Kwan Yew and Goh Chok Tong. Both men continued to influence the governance of the country after leaving office. It is unclear if the same will be true of Lee. 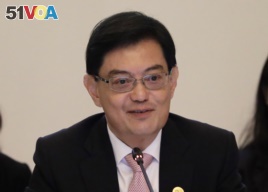 Heng is a former central banker. Observers say he is considered a "safe pair of hands." In 2016, he suffered a stroke and collapsed during a cabinet meeting.

People are increasingly criticizing the Singaporean government on social media. Singapore calls many such posts "fake news." Lawmakers have called for legislation to deal with what they call "online falsehoods."

The government has blocked a foreign based website. It has criticized Facebook for not taking down a post. And, it has seized equipment belonging to a local blog called The Online Citizen, or TOC.

Terry Xu is chief editor of TOC. He told Reuters that the government is reacting more strongly than before. The site is being investigated for possibly spreading false statements about government officials.

Rights groups have criticized Singapore for its control over the media. The group Human Rights Watch said it is concerned that the situation will get worse as the ruling PAP considers possible elections in as early as 2019.

The group Reporters Without Borders ranks Singapore below Russia and Myanmar for freedom of the press. The group said it was concerned about stronger control of the media as elections near.

A spokeswoman for Singapore's communications ministry said in an emailed statement that the TOC investigation "is in no way related to elections."

She said discussions including criticism of the government take place every day on many sites. But, she added, that does not mean the government will permit "public institutions to be impugned under the cover of free speech."

stable –adj. in a good state or condition that is not easily changed or likely to change

monopoly –n. complete ownership or control of something

transition –n. a change from one state or condition to another

impugn –v. to criticize a person by suggesting that they are not honest or should not be trusted