As Great Salt Lake Shrinks, Pressure to Do Something Grows

Update Required To play the media you will need to either update your browser to a recent version or update your Flash plugin.
By John Russell
16 July 2022


The surface of Utah's Great Salt Lake dropped to its lowest recorded level this July.

Researchers and politicians are worried about serious threats to animals and people who live near it.

The nearby city of Salt Lake City is already facing dust storms. Experts fear these storms, which blow dirt into the air, could get worse. 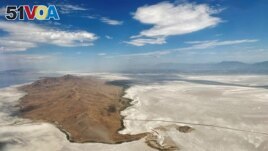 Scientist Kevin Perry has studied the lake for years. He said, "To save the Great Salt Lake, so that we don't become Dust Lake City, is to make a...choice that the lake is valuable and that the lake needs to have water put into it."

For years, water that would have gone to the lake has been used for drinking water, industry and agriculture. In addition, an ongoing drought – a long period of time with not enough rain - has reduced the lake's water level.

On July 3, U.S. Geological Survey (USGS) said that the surface of the lake fell to the lowest level since records began in 1847. Water levels are expected to decrease further until the autumn or early winter.

The lake now contains about one-fourth of the water it contained when it was at its highest level in 1987.

The lake has lost nearly half its average surface area. This means about 2,000 square kilometers of lakebed have been exposed.

Dried out earth that used to be underwater has created dust clouds that contain calcium, sulfur and arsenic. Arsenic is an element linked to cancer and developmental problems in unborn babies. Exposed lakebed also has chemicals left over from copper and silver mining.

Perry told the Reuters news agency, "If you breathe that dust over an extended period of time, like decades or longer, then it can lead to increases in different types of cancer...cardiovascular disease, diabetes and such."

An estimated 10 million birds of more than 330 species travel through or live at the lake each year, said Max Malmquist. He is with the National Audubon Society, an environmental group.

The shrimp are also harvested and are valued at millions of dollars. Officials estimate that economic activity from the lake is worth up to $2 billion each year.

Utah State Representative Tim Hawkes said there is political pressure to do something.

"As we hit these new record lows, we start to run the risk that all of those values that we derive from the Great Salt Lake could be at risk," he said.

Nathan Frandino reported on this story for Reuters. John Russell adapted it for VOA Learning English.

lakebed – n. the floor or bottom of a lake

expose – v. to leave (something) without covering or protection

brine shrimp – n. a small kind of shrimp that live in salt lakes

derive – v. to take or get (something) from (something else); to have something as a source : to come from something