Update Required To play the media you will need to either update your browser to a recent version or update your Flash plugin.
By George Grow
19 February, 2018


China observers have expressed support for a new Chinese government policy on land and property rights.

The proposal calls for permitting Chinese villagers to rent out their homes and farms. China experts say this could increase development and ease tensions in rural China, especially in areas ignored by the government.

The observers say a growing number of houses are empty in rural areas as people move to cities.

Chinese officials released the policy document earlier this month. It said the government would ease controls on rights for rural land and unused housing. As a result, it said, people who moved to cities could permit development of their properties or rent out their homes.

The policy could affect people unhappy with rural life. They could move but still earn money from their properties, said China expert Wasana Wongsurawat.

"Urban centers are growing, while the quality of life in rural areas has not improved, leading to growing dissatisfaction," she told the Thomson Reuters Foundation. She said the new policy may be a way to deal with that and persuade more people to move to the cities.

Wasana Wongsurawat is an assistant professor at Chulalongkorn University in Bangkok.

Almost 59 percent of China's population already lives in urban areas. Continued development is important to the government's plans for growth. China is the world's second-largest economy.

Chinese land is divided into urban and rural land regimes. The government has ownership rights over urban land, while rural land is owned collectively and cannot be bought and sold freely.

China began to examine its land use policies in 2014. 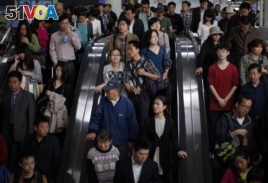 A major step toward reform

The government's decision to ease controls on land falls far short of creating an open market. But observers said it is an early move in a major reform process.

"It is significant as a step forward to liberalize land rights," said Dan Wang of The Economist Intelligence Unit research group.

She said the change in policy – if followed by other rule changes – may help influence businesses to develop very large farms.

She said, "If this round of land reform turns out to be successful, it will change the landscape of rural China greatly in terms of forms of employment, agricultural organization and even social structures."

She noted that the reforms could be weakened if farmland is seized for industrial use, or to grow for-profit crops instead of grains to feed Chinese communities.

rent – v. paying money in exchange for being able to use something

urban – adj. relating to or involving a city

regime – n. a system of rules; a form of government

liberalize – v. to ease rules or restrictions; to make something more liberal

landscape – n. a picture that shows a natural scene of land or the countryside