As Trump and Kim Meet in Hanoi, Former Trump Lawyer Testifies in Washington

Update Required To play the media you will need to either update your browser to a recent version or update your Flash plugin.
By Hai Do
27 February, 2019


American President Donald Trump was all smiles as he greeted North Korean leader Kim Jong Un on Wednesday in Hanoi, Vietnam. The two leaders met for the second time to talk about economic measures against North Korea and its nuclear weapons program.

The two exchanged handshakes in front of American and North Korean flags before holding their one-on-one talk at the Metropole Hotel.

As the dinner began, Trump said, "A lot of things are going to be solved I hope." He added, "I think it will lead to a wonderful, really a wonderful situation long-term."

Kim said, "We have met again here and I am confident that we can achieve great results that everyone welcomes."

Trump's attention is back in Washington

But, the events in Hanoi did not fully take the president's attention away from Washington, D.C. There, his former lawyer, Michael Cohen, was answering questions from Congress about his time working for Trump.

Just before his meeting with Kim, Trump wrote on Twitter, "Michael Cohen was one of many lawyers who represented me (unfortunately). He had other clients also. He was just disbarred by the State Supreme Court for lying & fraud. He did bad things unrelated to Trump. He is lying in order to reduce his prison time."

Hours later, Cohen spoke under oath before a committee in the U.S. House of Representatives. He was called to speak by Democratic lawmakers, over Republican objections.

Cohen told lawmakers that Trump directed him to lie about plans to build a skyscraper in Moscow, Russia. Cohen said Trump knew about the project, as he represented him in negotiations with Russia during the 2016 presidential election campaign.

Cohen has already admitted to lying to Congress about the project.

Also on Wednesday, Cohen claimed that Trump knew about his adviser's contact with WikiLeaks during the presidential campaign. Cohen said he was in Trump's office in July 2016 when longtime adviser Roger Stone called Trump on the phone. He said Stone told them about WikiLeaks' plan to release emails that were meant to damage Hillary Clinton's campaign. Cohen did not present any evidence of this, however. Clinton was Trump's Democratic opponent in the 2016 presidential race.

Cohen said he does not have direct evidence of collusion between the Trump campaign and Russia. He said he suspects there was collusion, however. 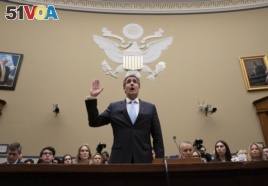 Michael Cohen, President Donald Trump's former personal lawyer, is sworn in to testify before the House Oversight and Reform Committee on Capitol Hill in Washington, Feb. 27, 2019.

Cohen claimed he witnessed a conversation between Trump and his son, Donald Trump Jr. Cohen said he believes the two talked about a 2016 meeting at Trump Tower in New York City. The meeting involved the younger Trump, the president's son-in-law Jared Kushner, his campaign manager Paul Manafort and a Russian lawyer with ties to the Russian government.

Cohen said Trump often told him that Donald Trump Jr. "had the worst judgment of anyone in the world" and he "would never set up any meeting of any significance alone — and certainly not without checking with his father."

Last year, Cohen admitted guilt to violating campaign finance rules by paying off two women who said they had relationships with Trump. Federal lawyers in New York have said Trump directed Cohen to arrange the payments in exchange for promises from the two women to stay quiet.

On Wednesday, Cohen told Congress that Trump personally signed checks to repay him. He showed the House committee a copy of a check for $35,000 dated August 1, 2017. At that time, Trump was already president.

At one time, Cohen said he would "take a bullet" for Trump while serving as his personal lawyer. But on Wednesday, he told Congress, "I am ashamed of my weakness and misplaced loyalty, of the things I did for Mr. Trump in an effort to protect and promote him."

Hai Do wrote this story for Learning English based on reporting from VOA, the Associated Press and Reuters. Ashley Thompson was the editor.

confident - adj. certain that something will happen

disbar - v. to take away the right of a lawyer to work in the profession

under oath - n. having made a formal promise to tell the truth

skyscraper - n. a very tall building in a city

collusion - n. secret cooperation for an illegal or dishonest purpose

pay off - v. to give something valuable (like money) in return for doing something illegal or dishonest

loyalty - n. the quality of showing complete support for someone

promote - v. to help someone or something