Asia Argento, a Leader of #MeToo, Accused of Sexual Assault

Update Required To play the media you will need to either update your browser to a recent version or update your Flash plugin.
By Ashley Thompson
20 August, 2018

Italian actor Asia Argento is among the leading activists of the #MeToo movement against sexual abuse in Hollywood. She was one of the first women to publicly accuse film producer Harvey Weinstein of abuse. 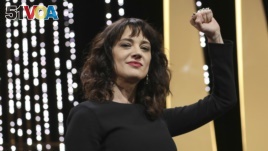 Bennett, who is 22, reportedly had filed documents describing the claim of assault and his plan to sue Argento.

Bennet says Argento had sex with him in a California hotel in 2013. He had just turned 17 years old. Argento was 37 at the time. The age of sexual consent in California is 18.

The documents say the experience harmed Bennett mentally and hurt his career, the Times reported.

The New York Times says it received court documents that included a picture of Argento and Bennett in bed together. Three people close to the case said the documents were real, the Times reported.

Argento and Bennett co-starred in a 2004 film called "The Heart Is Deceitful Above All Things." In the movie, Argento played a sex worker who was Bennett's mother.

Argento is one of the best-known activists of the #MeToo movement. Last year, she told the New Yorker magazine that Weinstein raped her at the Cannes Film Festival in 1997 when she was 21 years old.

Argento told the magazine that she continued to have a relationship with Weinstein because she was afraid of angering him.

Weinstein has been charged with sex crimes against three women. Argento is not one of them.

sue - v. to use a legal process by which you try to get a court of law to force a person, company, or organization that has treated you unfairly or hurt you in some way to give you something or to do something : to bring a lawsuit against someone or something

consent - n. permission for something to happen or be done