Update Required To play the media you will need to either update your browser to a recent version or update your Flash plugin.
By VOA
24 August, 2015


One Monday morning in Manila, cars moved in a slow line along the main avenue. Taxi driver Ranilo Banez shook his head at the long line of cars.

Crowded roads have become more common as Manila's economy grows. Mr. Banez said a 10-kilometer (or 6-mile) trip that once took 30 minutes may now take up to two hours.

In Manila and other cities in Asia, people are building many office and apartment towers. But the building of roads, railways and other important infrastructure has been slower, in part because of the 1997 financial crisis. 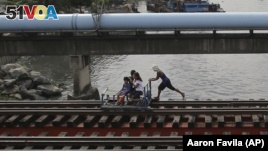 In this Wednesday, Aug. 12, 2015 photo, a man pushes a metal-wheeled cart with benches fashioned from scrap wood as he ferries passengers for 10 pesos each along the railway in Manila. (AP Photo/Aaron Favila)

Before the 1997 financial crisis, many developing Asian countries spent six to eight percent of their yearly economic output on public works. After the crisis, that amount dropped to as little as two percent. 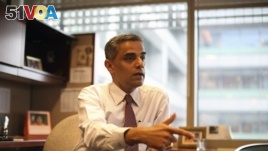 Ramesh Subramaniam is the deputy director general of the Asian Development Bank's (ADB) Southeast Asia department. He says that developing countries have a lot of work ahead of them to build the necessary facilities.

If spending does not increase, "then this could possibly have an impact on future growth," Subramaniam said. "Certainly it is going to reduce the competitiveness of the countries in the region."

Projects in the Philippines

In May, Philippines President Benigno Aquino III approved $1.4 billion in spending for commuter trains in Manila and other projects. That brought the total for infrastructure investment to $31.8 billion since Aquino took office in 2010.

The Philippines is not the only Asian country struggling to deal with crowded roads.

In India, Prime Minister Narendra Modi called for his country to speed up building "all projects that will ensure a modern infrastructure backbone."

To keep that up, India needs to spend $1 trillion on infrastructure for the next five years.

Projects in Vietnam and other Southeast Asian countries

In Vietnam, the government approved a proposal in June for a new airport. It will be located near Vietnam's business capital, Ho Chi Minh City, and cost $15.8 billion. The country also plans to spend $22.5 billion on new highways.

The demand for power in Vietnam also increases by 10 percent every year. State media say Vietnam needs to spend $125 billion in the next 20 years to keep up with the demand.

Thailand has a $92 billion building plan for the next few years. The plan includes high-speed train routes that will run from China in the north through Malaysia in the south to Singapore. It calls for expanding seaports and Bangkok's commuter trains.

But, many countries still do not know how they will pay for these projects.

China, Japan and the U.S. to play a role in developing Asia infrastructure

China has said it wants to be a regional leader in investing in infrastructure projects. More than 20 other countries joined with China to open the new Asia Infrastructure Investment Bank, or AIIB. The bank is expected to start with $100 billion in capital, mostly from China.

But many of the planned projects do not have a business plan that promises to produce profits and repay investors. And investors worry about the government interfering or possible delays over environmental and other concerns.

Still, Mr. Subramaniam of the Asian Development Bank said the region's total spending is likely to be less than half the amount required. He says Asia still needs more resources and different ways to pay for the projects.

Dr. Jill Robbins adapted this story with information from the Associated Press for Learning English. Hai Do was the editor.

facility - n. something (such as a building or large piece of equipment) that is built for a specific purpose

route -n. a way to get from one place to another place

Now it's your turn. What infrastructure projects are needed where you live? Write to us in the comments section.