Update Required To play the media you will need to either update your browser to a recent version or update your Flash plugin.
By VOA
17 October, 2016

Experts say statements made during the election campaign have raised concerns about the United States and its future in Asia and the Pacific. They wonder whether the next U.S. president will follow through on promises to stay active in the area.

The U.S. government has long sought to restrict North Korea's nuclear activities and to guarantee freedom of movement in the South China Sea. The government also has been working to expand American trade ties with East Asia. 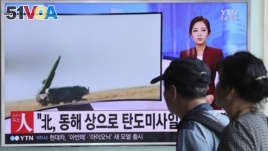 The two main presidential candidates have made comments suggesting some policies might change under the next administration. Also, the presidential campaign has gotten increasingly personal, with almost daily attacks by the candidates directed at each other.

Experts say this has led to questions about whether the United States will act on its promises to keep the Asia-Pacific a priority.

Jonathan Pollack is with the Brookings Institution, a research center based in Washington, D.C. He says either candidate -- Republican Donald Trump or Democrat Hillary Clinton – will need to reassure Asia-Pacific leaders after the election next month.

"It's really undermined the faith and the convictions that many regional actors have about the viability of American commitments and the stability of our own democracy. And I don't think any future president is going to be able ignore those issues."

Some Asia-Pacific leaders are worried about a Trump presidency, according to Robert Manning of the Atlantic Council's Brent Scowcroft Center on International Security.

Manning said there is a feeling of "fear and loathing" by some leaders about a possible win by Trump. Yet, he adds, there is "not enough coherence to Trump's comments" to get a clear idea of his foreign policy.

If Hillary Clinton is elected, she is expected to continue the strategic policies of the Obama administration.

But Clinton opposes the Trans-Pacific Partnership (TPP), which was signed by 12 Asia-Pacific nations. The U.S. Congress has yet to consider the trade deal. It faces opposition there from both Republican and Democratic lawmakers. 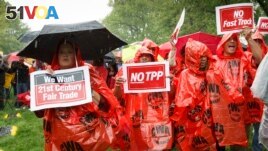 Demonstrators rally for fair trade at the Capitol in Washington D.C.

Trade has been a major issue in the presidential campaign, with many Americans in the two parties blaming such deals for lost jobs. But if the United States does not support agreements like the TPP, experts say, the U.S. will lose credibility in East Asia.

Trump also opposes the TPP, saying it would be a killer of U.S. jobs. The businessman has also raised concerns in the Asia-Pacific with his statements about security issues.

During a campaign stop in August, Trump expressed his displeasure with Japan, one of America's closest allies.

"If Japan is attacked, we have to get involved probably with World War Three, right? If we're attacked, Japan doesn't have to do nothing. They can sit home and watch Sony television, right?" 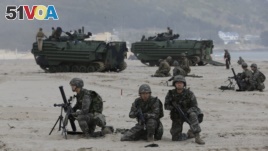 Robert Manning said the concern by some nations is that Trump has not shown he understands how nation alliances work. He added that one main reason the Asia-Pacific has remained secure since World War II is because of U.S. leadership and regional partnerships.

"Even though he [Trump] sounds like he is trying to be tough, [his position] is essentially an abdication of American leadership," Manning said.

While there are concerns about possible U.S. policies in the Asia-Pacific under a new president, Pollack said he expects America to remain an important regional partner.

"It is inconceivable to me that any American president, will in fact, try to detach the United States from the region."

Mary Alice Salinas reported this story for VOANews. Bryan Lynn adapted it for Learning English. George Grow was the editor.

We want to hear from you. How do you think a new American president will affect the rest of the world? Write to us in the Comments section, and visit 51VOA.COM.

priority – n. something important placed ahead of other things

reassure – v. do or say something to make someone feel more comfortable

faith – n. strong belief or trust in someone or something

abdication – n. no longer responsible for something

detach – v. to separate from someone or something else

strategic – adj. of or related to a general plan

regional – adj. of or related to an area