Update Required To play the media you will need to either update your browser to a recent version or update your Flash plugin.
By Bryan Lynn
07 February 2022


Many Asian nations have reported a rise in COVID-19 infections following the Lunar New Year holiday. Lunar New Year was widely celebrated in China and other parts of Asia beginning February 1.

The celebrations came as many countries kept pandemic restrictions in place in hopes of preventing virus spread. The rules included limits on the size of public and family gatherings. 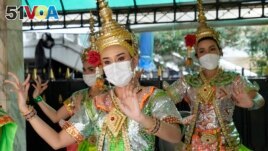 Hong Kong has established a "zero-COVID" policy that aims to quickly stop new outbreaks before they have time to spread widely. The policy calls for lockdowns at housing buildings that experience a large number of infections. Hong Kong has also banned restaurants from operating after 6:00 at night.

Edwin Tsui is with Hong Kong's Centre for Health Protection. He told reporters on Monday that officials expect to see more cases in the coming days. "With our current containment measures, we hope we can still contain the disease," Tsui said.

Singapore has reported a sharp rise in COVID-19 infections after last week's holiday. Officials there said new cases reached 13,000 on Friday. The city-state has reported more than 100,000 cases over the past month. But officials say about 99 percent of cases are considered light. Many of those infected have shown no signs of sickness.

Other Asian nations have seen similar increases in case numbers as the Omicron version of COVID-19 has become dominant. Officials in several countries report that Omicron has a much lower rate of hospitalizations and deaths than the earlier Delta version of the virus.

In Japan, nearly 90,000 new cases nationwide were reported on Sunday. This included 17,526 in Tokyo. Experts say the infections are now spreading to older people who are beginning to fill more hospital beds.

In Indonesia, case levels were close to the height of last year's Delta version outbreak. On January 6, Indonesia recorded 533 new COVID-19 cases and seven deaths. On Sunday, the daily number was 36,057. Daily deaths rose to 57, nearly four times the rate one week ago.

In Thailand, officials reported more than 10,000 daily cases Monday for the third day straight. But the Department of Disease Control said the number of severely sick patients was dropping and the death rate had stayed about the same.

In Vietnam, officials had warned that infections may rise after the popular New Year holiday. Over the past month, Vietnam has reported just 192 cases of Omicron, with most of those showing few or no signs of sickness.

The Philippines has moved to ease COVID-19 restrictions and open its doors to foreign visitors. Officials reported Sunday that case numbers eased to about 8,300 on Sunday. That was down from a high of 39,000 in mid-January.

In mainland China, new local infections continue to move up and down. Cases fell as low as nine on Friday but rose again to 45 on Monday. The majority of the new cases are in the southern area of Guangxi.

China ordered severe restrictions and mass testing ahead of the start of the Beijing Winter Olympics, which began last Friday.

lockdown – n. an emergency in which people are not permitted to freely move about an area because of danger

dominant – adj. the main or most important part of something